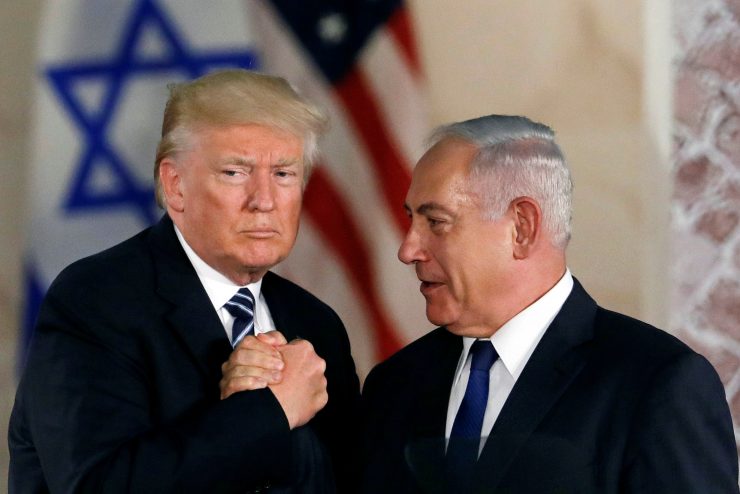 Donald And Bibi: The Blues Brothers

The following is a satirical would-be conversation between Prime Minister Netanyahu (Bibi) and President Trump (Donald) during Netanyahu’s upcoming visit to the White House on March 5th.

[White House, exterior. BIBI exits his motorcade, waving to the few dignitaries that were invited for the occasion.]

BIBI: (to himself) Will this be my last visit to the White House? (a pause) Oh well, I have weathered many storms before, I will still outfox everybody else, God willing.

[DONALD comes to the entrance to greet BIBI]

DONALD: Hello my friend, how are you?

DONALD: And how’ve you been, my friend?

BIBI: Well, considering everything that’s going on, I am sure you know how I feel.

DONALD: We have plenty to talk about.

[As they approach the Oval Office, DONALD dismisses his aids, along with VP Pence. DONALD and BIBI enter the office and close the door.]

DONALD: So tell me, what’s really going on with you. We are buddies, after all.

BIBI: What can I tell you, things will be better if only some of these schmucks leave me alone.

DONALD: I know exactly what you mean, Bibi. I have been saying that all along about many of these morons who are out to get me.

BIBI: I don’t understand why. I have served my country all my life, and look how they are treating me!

DONALD: Me too. I worked all my life building my business, provided so many jobs… I even opened a university to provide a quality education to those who wanted to learn firsthand how to make money. So, I made a fortune, you know, you cut corners here and there…and when I was short on money, I declared bankruptcy a couple of times. What’s the big deal? You know its legal, believe me.

BIBI: I wish I could say the same. In my country, if you are the prime minister, you can starve to death on this meager salary we get. I could never afford a decent cigar on my salary.

DONALD: I can afford anything. Call it greed, but I don’t want to stop making more and more money, especially now that I am president. My sons know how to take advantage of my position, and hey, why not? With money you can buy anything, if you know what I mean.

BIBI: Yes, I do know, but with my wife Sara around, forget it. She will kill me.

DONALD: I tell you Bibi, just between us, with some of these chicks around… it’s worth dying for.

BIBI: I never said this to anyone before, but you are my friend Donald, and I trust you. Looking at my wife every morning, I would do anything to lay my hand on one of those babes like the ones you had affairs with. My problem is, I’m always surrounded by my security detail; I can’t even look at a pretty face. Boy, I envy you.

DONALD: You are not alone, my dear friend, everybody envies me. But I do anything I want, and even now they can’t catch up with me.

BIBI: So, what do you think is going to happen?

DONALD: About what? You mean this Russian crap? Yeah, I worry once in a while. But you know, if you keep denying and go on the offensive and keep blaming the press for spreading fake news, some people start to believe you.

BIBI: I have been doing the same, but they are still after me. What can we do?

DONALD: You see Bibi, I am in a different category. I keep lying, and I keep tweeting, and this way I occupy the media…I mean this fake media. You know, it’s really not all that fake. But this way you keep them busy 24/7, keep them talking about what I just said, and then I say something different, and so on. I am always in the news. Good or bad, it doesn’t really matter as long as they’re talking about me. I really enjoy that.

BIBI: But my understanding is that the special counselor is closing in on you. Aren’t you worried?

DONALD: Yeah, but you know, as long as I keep my base happy and make sure that the House and the Senate continue to support me, I really don’t lose much sleep over it. I still have my cheeseburger while I watch my favorite program on Fox News. They are doing an excellent job to counter this witch hunt.

BIBI: You said it, it is a witch hunt! I have been saying that for months and months now, but I am afraid that I may be in some real trouble.

DONALD: Trust me, my problems are much more serious than yours. If this, what’s his name, Mueller, manages to link my political campaign to Russia and prove that there was collusion—which there was, you know—that will really be a serious problem. But somehow, I will manage to come out clean, you’ll see.

BIBI: In my case, you see, once I am indicted, there is no way I can come out of this clean. Between us, I took bribes, I swam in the most expensive champagne; and Cuban cigars! Forget it. You should try it sometime, especially with one of those blonde chicks.

BIBI: I hope you don’t mind me asking you, what’s going on between you and Putin? How come you never criticize him?

DONALD: Well, it was one of those crazy things. When I sponsored the beauty pageant in Moscow, I ended up in my suite with five, you know, really gorgeous girls, and one thing led to another… I don’t have to tell you the rest. Anyway, Putin has the whole damn thing on video; what he can do with that, I can’t even imagine.

DONALD: You said it. So what choice do I have?

BIBI: I understand you. By the way, how is Melania taking all that’s going on?

DONALD: Oh well, she’s used to it. Sometimes she goes crazy, especially when all these beauties reveal my shenanigans. Well, that’s me, what can I say. She barely talks with me about anything—actually, we barely have any real relations. You know, we sleep in different bedrooms, actually. I prefer that. This way I don’t have to explain anything to her. Tell me, what’s going on with your wife Sara?

BIBI: Like I said, she is a pain in the neck, she wants to know everything. To tell you the truth, I hate having to consult her, but in the end, I always do exactly what she says. She’s gotten me into so much trouble; with everything she has, she still wants more.

DONALD: Oh no, I couldn’t take that. You’ve got to do something about it.

BIBI: Are you kidding?! I am trapped, period.

DONALD: I really feel sorry for you.

BIBI: Not as much as I feel sorry for myself. I can’t believe it. After all these years, I find myself in a such shit hole.

DONALD: Well, it can be worse.

BIBI: How can it get any worse?

DONALD: Look, you are the Prime Minister, you can still pull some strings. You need to do whatever it takes. You can cheat, bribe, lie, intimidate, threaten—look, I do all of that and then some. And look at me, I’m still here and I’m already planning for my run in 2020, believe me.

BIBI: I wish I had the same confidence as you do.

DONALD: Well you know, I am a master manipulator. People laughed when I said I am a genius and very stable, how else would I have been able to get away with everything I’ve done?

BIBI: Well, we’ll see. I just hope that this will not be our last meeting as president and prime minster. I can’t tell you how much I and my country appreciate your incredible support—especially your recognition of Jerusalem as Israel’s capital.

DONALD: No problem. You know, I don’t care about the Muslims, and if I could help it, I wouldn’t want to do anything with them, except sell them condominiums and take tons of their money. When I decided to recognize Jerusalem, I said to myself, well, this is one way I can stick it to them. After all, I am the most powerful man on earth, everybody says that, right? And between you and me, I really hate those blacks and Hispanics too. They’re invading like locusts, and before you know it, they’ll rule the whole country.

BIBI: Look Donald, I am with you on that. We have a similar problem with the Palestinians and Ethiopians. But there’s this thing about Iran. Before we get sacked, maybe we should do something about Iran.

BIBI: You’re telling me? I think you should walk away from the deal and impose new sanctions and let us show them; otherwise, they will never stop threatening us and exporting terror and destabilizing the whole region. We need to put a stop to this.

DONALD: I agree, we have problems with our so-called allies. They don’t want me to get rid of the accord; they’re afraid that this could further destabilize the Middle East and may even “instigate the proliferation of nuclear weapons,” whatever that means.

BIBI: Of course, that’s what they keep saying, but you and I know this is a bad deal, and we cannot allow the Iranians to end up with nuclear weapons. Certainly not under my watch.

DONALD: Well I am going to withdraw from the deal, and probably neither you nor I will be around to deal with the consequences. Frankly, we may not be able to get out from under these ridiculous accusations—especially because they are all true—but we can at least leave behind something that everyone will remember. You know, sometimes you have to create chaos to get what you want.

BIBI: I always knew I could count on you. You are a real mensch, my friend.

DONALD: Time for dinner! You know, it just occurred to me that once we are both out of office, whenever that happens, you should come and visit me at Mar-a-Largo. Leave Sara at home, and I’ll do the same.

BIBI: I am with you, my friend. Oh, by the way, I brought with me a couple of those bottles of champagne, and a box of Cuban cigars that I got as gifts. This is my gift to you. Silly, they call that a bribe, but I am sharing it with the President of the United States! Come on, let’s have some fun while it lasts.

During his nearly 20 years in power, Recep Tayyip Erdogan has violated human rights in his own country of Turkey and destabilized and exploited others in order to promote his nationalist agenda abroad. Western powers, especially his allies in NATO, have ignored his transgressions as the price they are willing to pay to keep what…

Do Not Squander The Last Vestiges Of A Fading Opportunity

Dear President Abbas; I hope that this final appeal will awaken you to the reality that you can no longer ignore. Time has just about run out and your immediate decision to agree or refuse to enter into new peace negotiations with Israel will determine the future of your people for generations to come. They…

The Last Chance For A Viable Two-State Solution

Notwithstanding what has been commonly discussed, if the Netanyahu government moves on its plan to annex nearly 30 percent of the West Bank, which will include the Jordan Valley and Israeli settlements, it would precipitate major adversarial repercussions for Israel. To begin with, violence between Israelis and Palestinians will substantially increase and potentially lead to…