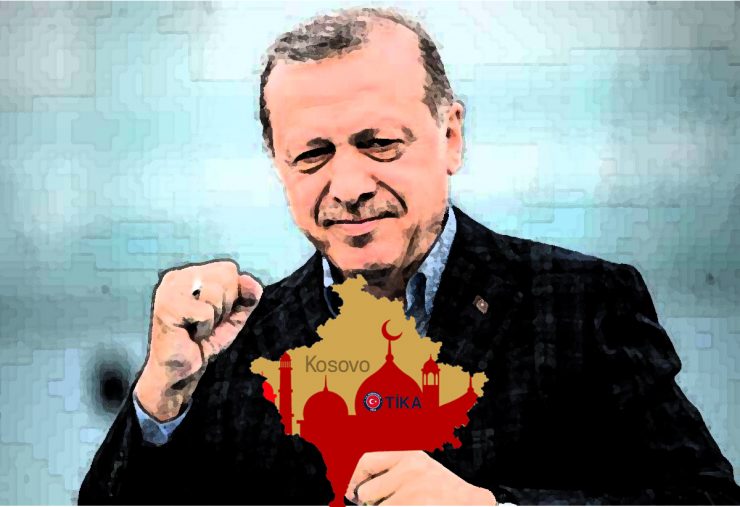 This article is co-written by Alon Ben-Meir and Arbana Xharra. Arbana Xharra authored a series of investigative reports on religious extremists and Turkey’s Islamic agenda operating in the Balkans. She has won numerous awards for her reporting, and was a 2015 recipient of the International Women of Courage Award from the US State Department.

Whenever Kosovo is mentioned we are reminded of the 90s, when Europe and the US provided shelter for hundreds of thousands of Albanians who resisted the tyrannical Milosevic regime. A few years later in 1999, the US, jointly with EU countries, launched NATO air strikes against the Serbs’ artillery position to end their atrocities. With the support of Western countries, Kosovo became the newest state in Europe, and this year it celebrates its 10th anniversary as an independent country.

Kosovo is known as one of the most pro-American countries, where boulevards are named after President Clinton, with his 11-foot-tall statue at the entrance of the capital city Pristina. Streets are named after George W. Bush and Beau Biden (the late son of Joe Biden); girls are named after Madeline Albright, and boys after other notable American figures. In 1999, the US built its largest military base in the Balkans, Camp Bondsteel, in the eastern part of Kosovo. Kosovo is defined by its constitution as a secular state; Islamic headscarves and religious instructions are banned in primary and secondary schools.

Now Kosovo is being targeted by Turkey’s President Erdogan, who is bent on spreading his Islamic agenda throughout the Balkans. He views Kosovo as easy prey and a means by which to promote his wicked plans, and uses its submissive President Hashim Thaci to do his bidding. Millions of euros are flowing from Turkey to Kosovo through illegal routes, bypassing banks and other legitimate financial institutions. In 2015, Pristina-based Albanian language daily Zeri revealed that Erdogan is increasing his influence through the building of religious institutions, including dozens of new mosques, and the restoration of existing ones built during the Ottoman Empire.

These new and old religious structures are financed through one large donor, the Turkish Cooperation and Coordination Agency (TIKA), which is directly managed by the Turkish embassy in Pristina. Even more troublesome is that Kosovo’s main assets—the airport and electricity grids—were sold to companies controlled by Erdogan’s son-in-law, when Kosovo’s current president was the Prime Minister.

On March 29, Kosovo deported six teachers from Gülen schools to Turkey, becoming the third country after Iraq and Sudan to hand Gülenists over to Erdogan’s brutal treatment. Erdogan regularly pressures the EU and US to deport “his enemies” to Turkey, but fortunately none of the Western countries are willing to cave in to Erdogan’s anti-Western Islamic agenda.

After the widespread media coverage and civil outcry over these brazen deportations, none of Kosovo’s leaders assumed responsibility, albeit Prime Minister Ramush Haradinaj dismissed his Interior Minister and intelligence chief over these deportations, stating that this was done without his permission.

No one can trust President Thaci’s statement denying any knowledge of the operation, as he is known to be a close ally of Erdogan. In conversation with us, Berat Buzhala, Editor-in-Chief of the largest online media platform in Kosovo, Gazeta Express, said that “The kidnaping of the Gülenists in Kosovo was organized by both presidents, Erdogan and Hashim Thaci.”

Buzhala is convinced that Thaci is lying to the public. “Everything that happened was coordinated between them. How else would the Turkish secret service succeed in kidnaping six Gülenists from Kosovo with a private jet from Pristina Airport, in cooperation with Kosovo Police and the Intelligence Agency, and the President is not aware?!” asks Buzhala.

Erdogan has slammed Kosovo’s prime minister, Ramush Haradinaj, saying on March 31 that he was “saddened” and that Prime Minister Haradinaj would “pay” after he dismissed both his interior minister and his intelligence chief for deporting the six from Kosovo without his permission, states the Associated Press.

Kosovo civil society and the majority of the media reacted against the abduction of the six Gülenists. Lulzim Peci, former Ambassador of Kosovo to Sweden and Executive Director of the Kosovo Institute for Policy Research and Development (KIPRED), said to us that the scandal of the arrest of six Turkish citizens, and their subsequent handover to Turkey’s National Intelligence Organization (MIT) by Kosovo Police, presents one of the most repugnant acts of human rights violations of foreign residents in Kosovo.

“The affected Turkish citizens had not undergone any of the legal proceedings required by the national law, and above all, the Human Rights Convention of the Council of Europe has been gravely violated, taking into consideration that deported citizens are awaiting unjust judicial proceedings in Turkey”, said Peci.

In a conversation with Ilir Deda, a member of Kosovo’s Parliament representing Alternativa, he too blamed Kosovo’s president for this shameful act that has undermined the foundation of the youngest democracy in Europe. “President Thaci went rouge and gave the order to illegally arrest and deport these citizens… fearing for his personal fate, [he] is creating continuous crisis in order to politically survive. This latest crisis has directly created an internal backlash”, says Deda.

Sociologist Sibel Halimi criticized the politics for fostering a perfect environment for Turkey to spread its influence. She explained to us that “The determination of Turkey to invest in mosques is expanding Erdogan’s influence into other spheres as well. Here I am referring to the priority given to Kosovo’s political class and the readiness of Turkey to buy Kosovo’s state assets such as KEK [Kosovo Energy Corporation] [and] airport…”

Unfortunately, the European Union’s reaction was measured, when in fact it should have been resoundingly critical because it threatens Kosovo’s very sovereignty. “The arrest and subsequent deportation of six Turkish nationals legally residing in Kosovo” said Maja Kocijancic, spokesperson for the European Commission on her public statement, “raises questions about the respect of the due process of law.”

Kosovo’s parliament unanimously voted to establish an investigative committee to examine the institutional collapse, and the violation of the Constitution and respective laws with the arrest of the Gülenists. The independent ombudsperson has also begun an investigation into this extradition.

The influence of Erdogan’s Islamist agenda in Kosovo and other Balkan countries, however, needs more scrutiny from Western countries. Erdogan has already invested millions in mosques, and thousands on other projects. Kosovo remains the only country in the Balkans deprived of visa liberalization, which isolates the country and increases the risk of creating a perfect atmosphere for Erdogan’s Islamic exploits.

The US and the EU must come to their senses and warn Erdogan that his insidious ambition to dominate Kosovo by whatever means at his disposal will not be tolerated, because it is nothing but a recipe for destabilization and violent conflict that transcends the Balkans.

I am at a loss for words to describe my utter outrage, my excruciating pain, and my revulsion at yet another massacre in what has become an unending cycle of carnage wrought by guns. The perpetrators are not only the murderers themselves but the Republican members of Congress who enable them to commit such heinous…

I only echo the voices of thousands who sounded the alarm before me, but then again it cannot be said enough. America is facing unprecedented social and political peril. We must mobilize every resource humanly possible to prevent a catastrophe from happening before it is too late. Righting the Wrong Since Trump rose to power…

A New Strategy Is Needed To Address Iran’s Nuclear Program

A revised Iran nuclear deal based on the 2015 JCPOA could provide the basis for a new Biden administration strategy that would limit Iran’s nuclear program to peaceful purposes and ensure that Tehran’s public pronouncement that it is not seeking to acquire nuclear weapons becomes a de facto reality. Righting the Wrong Regardless of how…