A Moral Outrage That Enraged No One 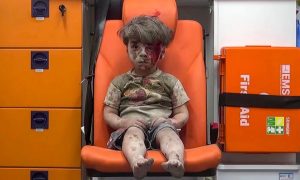 Five-year-old Omran Daqneesh sits in the back of an ambulance after a military strike in the rebel-held neighborhood of Qaterji in Aleppo.
Mustafa al-Sarout/ALEPPO MEDIA CENTER

The ongoing horror in Aleppo should awaken every global leader with an ounce of courage to step up and do whatever it takes to end the slaughter and inhuman suffering of the Syrian people. The fact that the siege of Aleppo continues unabated only exposes the ineptitude and moral decadence of the international community, who have failed to save innocent Syrians from Assad’s killing machine. The US should now take a firmer position on ending the butchery in Aleppo.

By focusing primarily on defeating ISIS, the US is de facto helping Assad to continue his merciless campaign that has killed nearly 500,000 Syrians, displaced 11 million, and rained down destruction unseen since World War II. The slaughter of countless innocent Syrians, especially children, must first stop—only then can negotiations for a long-term cessation of hostilities begin.

Given the complexity of the civil war in Syria, as things stand today there is no solution in sight. There are multiple players—including the Assad regime, the rebels, ISIS, Iran, Russia, the US, Turkey, the Syrian Kurds, an assortment of various extremists groups, and others like Saudi Arabia who are waging a proxy war both in Syria and Iraq—who all have serious stakes in the outcome of the civil war.

Each has different alliances and objectives, and there is absolutely no way for all of them to reach a consensus because none are truly concerned about the plight of the Syrian people, instead using the conflict only to serve their strategic long-term interests.

President Bush’s reckless invasion of Iraq in 2003, which has and continues to violently shake the entire Middle East, caused President Obama to shy away from getting deeply involved militarily in Syria. He was and still is (perhaps for good reason) seeking to prevent further escalation for the worse, because he too sees no prospect of ending the conflict any time soon, even with massive American involvement.

As a result, Obama has essentially relinquished Syria and its people to the whims of Russia and Iran in particular, and is allowing Putin to use any military means as he sees fit to protect Assad as long as he serves as a tool to secure Russian interests.

US efforts to arrange for another ceasefire, even if achieved, will not succeed any more than the previous one, and at best would provide a limited, tenuous cessation of hostilities. The reason behind this tragic war is that such an intractable conflict with so many players and divergent interests cannot be settled as long as one of the following four conditions of solving a conflict remains absent.

As a rule, violent and seemingly irreconcilable conflicts cannot be resolved unless a) the conflicting parties involved reach a point of complete exhaustion; b) the main players conclude that they can no longer improve their position and prevail; c) there is no longer an inherent interest in prolonging and simply managing the conflict by one or more of the main players to serve a long-term strategic objective; or d) a catastrophic event has occurred which would make the return of the status quo impossible, forcing the conflicting parties to scramble for a permanent solution.

Given that none of the four prerequisites are present and are unlikely to occur any time soon, we can expect Syria’s civil war to continue for five to ten more years, which is not unprecedented. Among many others, the civil war in neighboring Lebanon lasted for nearly 15 years (1975-1990), and the civil war in Algeria lasted 10 years (1992-2002).

Being that the civil war in Syria will drag on for several more years, the question is: how much longer can the US afford to watch from the sideline and allow the unforgiven slaughter of innocent men, women, and children to continue unabated?

Notwithstanding the presidential election, the United States cannot afford to relinquish its moral leadership role. At a minimum, the Obama administration must send a clear and unambiguous message to Assad by undertaking a surgical bombing of Syria’s air fields, some of its air force installations, and specific well-known military structures.

This undoubtedly will resonate with the Russians as well as Assad, because the last thing either wants is an increased American military role against the regime. This explains why Assad was more than willing to give up Syria’s chemical weapon stockpile, precisely because he wanted to avoid US attacks. Unfortunately, Assad’s surrender of his chemical weapons would have been a far more effective deal had it not frozen Obama from taking any subsequent military action.

Short of that, Assad was not deterred from using barrel bombs that indiscriminately kill, maim, and destroy entire neighborhoods, leaving nothing but the shadows of hell lurking behind. US military strikes, however limited in scope and duration, will put Assad and his Russian culprits on notice that the US will not allow them any longer to commit monstrosities with impunity.

If nothing else, the US will restore some of its credibility and relevance, but more important, it will prevent further butchery and accelerate the process of reaching a more durable ceasefire, at least between the main players.

If he fails to do that, history will not recall Obama’s significant domestic achievements but his role as the president who witnessed firsthand the tragic disintegration of a whole nation and did little to stop it, which is a continuation of President Bush’s disastrous Iraq war only in another form.

Perhaps the most catastrophic element of Syria’s war is that two or even three generations of Syrians are now lost, leaving behind the deepest historical scars.

Every free nation will have to face it in shame and disgrace, as they have failed miserably to rise and stop the greatest evil that has ravaged a country and save whatever is left of their moral credence.