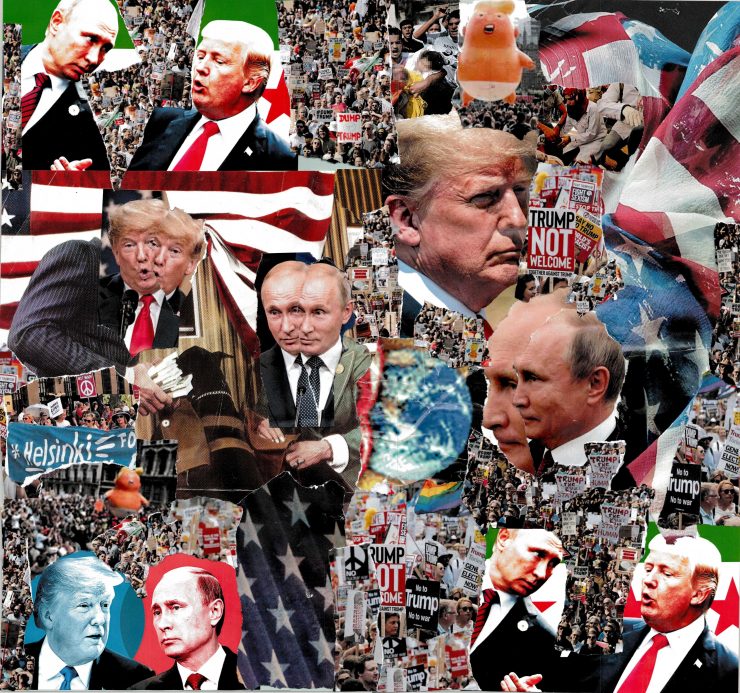 My visit to Brussels last week during the NATO annual conference was nothing short of bewildering and dismaying. Trump’s rampage against our most trusted and faithful allies sent shivers throughout the city, especially in the halls of the European Parliament where I spent considerable time talking to officials from different countries. They, and just about every other person I spoke with, were shocked to see and hear the President of the United States berating our closest allies, especially Chancellor Merkel of Germany and Britain’s Prime Minister May. He treated them as if they were junior business partners who failed to pay their dues while reaping much of the profits. Trump’s rage against them was appalling, displaying a complete lack of decency if not outright hostility.

These are the 70-year-old allies that stood by us through thick and thin, never wavered, demonstrated utter loyalty, willingly accepted American leadership, and took pride in an alliance that promoted peace and stability while safeguarding the principle tenets of democracy.

With unified resolve and unshakable commitment, they brought about the collapse of the Soviet Union, ushering in an unprecedented period of economic growth and prosperity while ensuring the national security of every member state and their allies outside Europe.

These are the allies who were the first to respond to the 9/11 attack on New York and Washington by evoking NATO’s Article V and stopped short of nothing to provide any aid and support to what they considered their most cherished ally – America – that stood by them in their hours of need throughout the Cold War and beyond.

These are the allies that joined the US’ campaign against Al-Qaeda in Afghanistan 17 years ago, and as of this writing, they continue to stand shoulder-to-shoulder with the US even in an unwinnable war that has and continues to exact so much blood and resources. The alliance remains fast and steady in their determination to stand by the United States, which in turn has shown uncontested loyalty to its alliance with the European countries.

These are the allies that joined the US in the Iraq War, and however disastrous the war turned out to be, they never hesitated. They have sacrificed men, women, and treasure to the war efforts, and to this day they are still suffering from the consequences of this misguided war—a war that gave birth to ISIS and other violent extremist groups that have been terrorizing Europe while it struggles with waves of refugees flocking to its shores.

These are the allies who supported the US in its efforts to deal with wars and crises in the Middle East and Africa. Regardless of how bad and misguided some of these efforts were, be that in Libya, Syria, Iraq, or the Balkans, they remain consistent in their commitment to stand by America.

Every American President from Truman to Obama honored and took pride in America’s historic contribution to the rebuilding of Europe from the ashes of World War II, which led to the emergence of NATO and the European Union.

This was a testimony to America’s greatness, shining as the beacon of democracy and human rights, and inspiring scores of other nations to emulate it. America and our European allies stood together for what is right and moral, and made huge sacrifices to preserve the new exalted order.

That is, until Trump became the President of the United States. In short order, he shattered this most unique and successful alliance, questioned the value of NATO, and disgraced its leaders. He tore Europe apart and subjected it, along with America, to the whims of the West’s harshest enemy, Putin’s Russia.

Senator McCain put it succinctly, stating that Trump made “a conscious choice to defend a tyrant” and presented “one of the most disgraceful performances by an American president in memory.” To be sure, Trump betrayed every principle and value the alliance has upheld, which raises a serious question as to what our allies should do now to save the alliance from being completely destroyed as a result of Trump’s treachery.

It is hard to imagine that while sharing the stage with an enemy on foreign soil, Trump openly sided with Putin over his own intelligence community’s findings about Russia’s meddling in the election while overturning decades-long US foreign policy toward Russia only to serve his narrow political interests.

Trump’s betrayal of our European allies will be remembered as the darkest chapter in the history of the NATO alliance, and it will not be rectified as long as Trump is in power. Trump’s bullying of our most cherished allies last week in Brussels while displaying unreserved respect for the West’s foremost nemesis—Putin—was unconscionably disgusting and outlandish, if not a betrayal.

To be sure, James Clapper, the former Director of National Intelligence, called Trump’s acquiescence to Putin “an incredible capitulation,” and former CIA chief John Brennan characterized it as “nothing short of treasonous.”

Due to this erratic behavior, Trump has now provided a historic opportunity for the EU to reassess its role and commitment to its alliance with the US. Whereas the EU must make every effort to preserve the integrity of the alliance, it must strive toward ending its psychological and emotional dependency on the US and anchor the alliance with America on a mutuality of strategic objectives.

That means the EU must be prepared to act unilaterally and independently when its collective national security interest is threatened, with or without the support of the US. The EU will be far more respected by the US and treated as an equal by assuming an independent posture, which must be sustained regardless of who occupies the White House.

To that end, the EU ought to develop its own vision of where it wants to be in the next 15 to 20 years, and what measures it must take to preserve the integrity of the European alliance. The door will remain open for America’s leadership under a sane and principled president who understands the far-reaching values of the alliance.

This time, however, the EU should build the political and defense mechanism with all that implies to stand on its own as Germany’s Chancellor Merkel has recently stated, and accordingly develop a strategy that will lead it to the realization of such a vision in stages. The EU should obviously be prepared to take any corrective measure and rise to any challenge that may emerge.

Sadly, regardless of how long Trump may last, he has already caused incalculable damage to the Western alliance. The fact is, there is a constituency that blindly supports such a misguided leader, which will undoubtedly outlast him and continue to impact American foreign and domestic policy.

As such, the EU cannot rule out potential American policies skewed in favor of “America first” that the Republicans will continue to embrace if they want to remain in power. To counter that, the EU needs, for obvious reasons, to continue to fully adhere to any agreements and treaties agreed upon, in defiance of Trump. The Paris Agreement on climate change and the Iran deal provide good examples.

Independently from the US, the EU ought to strengthen its military capability and acquire credible deterrence against Russia. As such, the EU must remain the most potent military force in Europe within NATO’s framework and allocate all necessary funding to that end.

In this regard, the EU should reassess Turkey’s reliability and trustworthiness as a member in the Organization and must not rule out kicking Turkey out as long as Ankara defies the NATO charter by its gross human rights violations and its cozying up to Europe’s foremost nemesis—Russia.

The EU must also consolidate its institutions by reforming its constitution, particularly the decision-making process to enact timely and more effective policies. This is very important, especially now that it faces turmoil related to Brexit and internal political discord. Furthermore, it must develop a permanent financial structure that address the needs of member states experiencing financial difficulties such as Greece.

The EU should freeze further expansion of its member states until such time when it has realized much of its reforms. Meanwhile, the EU ought to develop and nurture relations with all potential candidates for membership, particularly the Balkan countries, to stifle the ambitions of Turkey’s Erdogan from luring these states into his Islamic orbit.

The EU needs also to focus on conflict resolution, especially in the Middle East and Africa, that have a direct and indirect impact on Europe. The EU has direct strategic and security interests to play an active role in the search for a solution to the conflicts in Libya (a byproduct of the European role in toppling Gaddafi) and Yemen and should certainly make continuing efforts to find a solution to the Israeli-Palestinian conflict, however illusive that may seem.

The EU ought to change the nature of the relationship with Africa not simply from donor to recipient but play a direct role in in the growth of underdeveloped African countries—not only because it has a moral obligation resulting from colonialism, but because such efforts serve the EU’s own security interests.

A substantial part of the EU’s extensive financial contribution to the African Union (over $3 billion since 2004) should be devoted to sustainable development projects to provide job opportunities and empower local communities. This is the most effective way of addressing the root causes of violent extremism and migration, from which the EU suffers greatly.

Trump has become a marionette manipulated by a master puppeteer, Putin. He can no longer be trusted to serve either America’s or our allies’ interests. To be sure, Trump will face the judgment of the American electorate, hopefully sooner rather than later, and the historically indispensable alliance with our European partners will be restored.