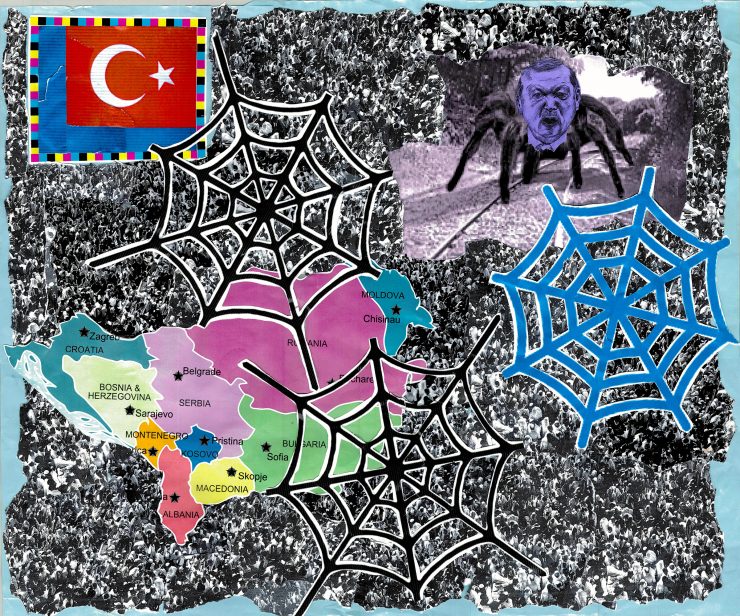 Banned from promoting his dangerous Islamic agenda across the European Union, Turkish President Erdogan is now seeking to use his growing influence in the Balkans against the Western countries. Erdogan’s aggressive return to the Balkans increased concerns among critics in southeastern Europe—the region where he is pursuing more assertive policies and strategically spreading his brand of Islamist nationalism through a network of mosques and religious institutions.

The EU countries have come to realize the danger emanating from his Islamic scheme. As a result, Austria, the Netherlands, and Germany banned Erdogan from organizing electoral campaigns. Furthermore, two months ago, Austria’s Chancellor Sebastian Kurz ordered the closing of seven mosques and expelled Turkish-funded Imams while placing under tight scrutiny dozens more Turkish Imams. “Parallel societies, politicized Islam or radical tendencies have no place in our country,” Kurz said as was reported by the New York Times.

Austria’s move to close mosques prompted a furious reaction from Erdogan, who condemned the decision, labeling it Islamophobic and promising to retaliate against them. He used the rally in Bosnia to underline his proclivity for challenging the Western countries. He declared in front of a crowd of more than 12,000 supporters that “At a time when the glorious European countries that claim to be the cradle of democracy failed, Bosnia and Herzegovina proved to be not ostensibly, but truly democratic by giving us the opportunity to gather here.”

Many corrupt politicians, Imams, representatives of NGOs, and members of academia in the Balkans remain united in their resolve to campaign on Erdogan’s behalf, as they have been enjoying over the years the largess and comfort that Erdogan provides to his loyalists. This is how Erdogan succeeded in winning hearts and minds, especially among the region’s Muslim population.

Albanian politician Grida Duma, representing the Democratic Party, the second-largest group in the parliament, said to us that, “For Rama, the Albanian Prime Minister’s challenge to the EU by appeasing Erdogan is dangerous… and would create serious consequences… as the closeness between Rama and Erdogan does not serve Albania’s geostrategic interests.”

Journalists and civil society representatives from Balkan countries are deeply concerned about what may come next, notably following the amendment to the Turkish constitution and Erdogan’s reelection, which granted him unprecedented powers.

Andi Bushati, a journalist and publisher from Albania, affirms Duma’s observation and suggested that “This closeness manifests itself not only by symbolic acts, such as Rama’s applause to Erdogan’s statement that ‘Kosovo is Turkey and Turkey is Kosovo,’ but also politically, for example, by endorsing Erdogan’s condemnation of Trump’s recognition of Jerusalem as Israel’s capital.”

To express their admiration of this authoritarian leader, Serbian, Macedonian, Kosovar, Albanian, and Bosnian leaders hailed Erdogan’s re-election and attended his inauguration in a show of solidarity.

Meanwhile, Kosovo’s acquiescence to Erdogan’s Islamic agenda is becoming increasingly transparent. A few weeks ago, hundreds of Kosovars marched in support of “Turkish democracy” led by the Turkish Ambassador in Kosovo, Kıvılcım Kılıç.

Bekim Kupina, a seasoned journalist from Kosovo, said that Kosovo’s leaders must not allow Erdogan to use their country as a springboard to Europe. “Kosovo needs schools, kindergartens, and job opportunities, and not religious institutions that Turkey is building.”

Jelena Milic, director of the Center for Euro-Atlantic Studies in Belgrade, confirms that Erdogan and Serbian president Aleksandar Vucic are developing increasingly strong ties. “Erdogan’s track record is not criticized by Serbia’s government-controlled media. Erdogan and Vucic visited Sandzak, a Bosnian Muslim populated province of Serbia, but Erdogan was very cautious to highlight only economic ties and investment opportunities”, says Milic. According to her, Turkey’s influence in the region is growing at an alarming speed.

Former Bosnian diplomat Zlatko Dizdarević, who served as ambassador to Jordan, Croatia, Iraq, Syria, and Lebanon, describes Turkish meddling in Bosnia as a “threat” which further weakens the country by deepening internal divisions.

On the night of Erdogan’s re-election, Bosniak member of the Presidency of Bosnia and Herzegovina, Bakir Izetbegović, congratulated Erdogan on his victory, stating “Mr. President, you are not only the president of Turkey, you are the president of all of us.” Sead Numanovic, Bosnian journalist, said that such statement further encourages Erdogan to intensify his interference in Bosnia, which has recently opened an AKP office in Sarajevo.

“Erdogan made a public promise to build a highway and speed road between Sarajevo- Novi Pazar and Belgrade. The cost of these two projects alone is over 3 billion euros”, says Numanovic. He believes that the recent election’s outcome in Turkey has emboldened Erdogan, who will use his power and prestige to increase his political influence in the Balkans.

Erdogan is bent on doing so through financial means and investments, and there is little that can stop him because he believes he can lock horns with the EU without chancing much.

Conversely, Duma said that “While the main projects were given to Turkish companies, there is no American company that has invested recently in Albania.” There is no doubt about the closeness between Albanian Prime Minister Rama and Erdogan. Beside their friendly relations, they also support each other electorally.

To be sure, Erdogan has made his unprincipled position clear to Western powers, stressing that Turkey will become as powerful and influential as the Ottoman Empire was during its heyday. Erdogan’s ambition to reconstitute elements of the Ottoman era should have a chilling effect on any country with which Erdogan seeks active bilateral relations.

There are always insidious intentions behind his overtures, especially now that most of the countries in the Balkans are in the process of negotiating entry into the European Union, especially Serbia and Macedonia, who are recognized candidates for accession.

The Balkans now are Erdogan’s trump card against Europe, especially after he was barred by EU countries from expanding his Islamic agenda and particularly because the door for Turkey to become an EU member has, for all intents and purposes, been shut.

Since the Western Balkan countries have been seeking long-lasting relations with the EU, the EU should further strengthen its relations with the Balkan states by providing financial support and investing in major projects, while continuing to encourage social, political, and economic reforms.

That said, despite the preoccupation with Brexit, immigration, and violent extremism, the EU must maintain steady progress toward integration of the Western Balkan nations. By commencing accession negotiations with Macedonia and Albania, which according to the European commission are ready to join, the EU will send a clear message to the rest of the Balkan states of its seriousness about their prospective membership.

This will send a cautionary note to the Balkan leaders that the path to EU membership is open, but of necessity requires that they not cozy up to Erdogan, who has betrayed the EU’s founding principles and is obsessed with luring the Balkans to join his Islamist nationalistic orbit.