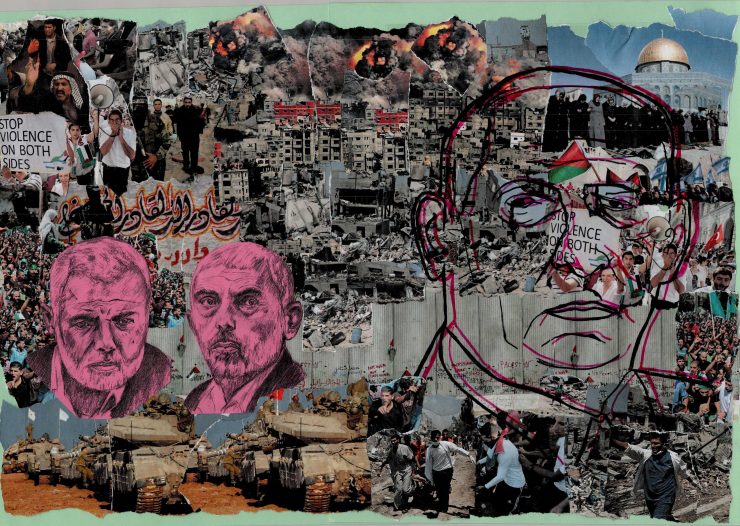 Israeli and Hamas Leaders Must Face the Bitter Reality

The ongoing Palestinian demonstration along the Israel-Gaza border has turned out to be, not surprisingly, violent. More than 30 Palestinians have been killed and hundreds injured. If these demonstrations continue through May 15 (Israel’s 70th anniversary) as planned by Hamas, scores more Palestinians will likely be killed, while increasing the probability of Israel invading Gaza for the fourth time in an effort to end the crisis. Regardless of how this conflagration ends, however, the biggest losers are the Israeli and Palestinian people.

What is truly sad is that when the dust finally settles, the dead are buried, and the wounded heal, nothing will have fundamentally changed on the ground. The mutual psychological and emotional scars, resentment, and hatred will continue to consume both sides from within, with even greater intensity. It will be only a question of time when the deadly violence will resume. The blame rests entirely on the corrupt and misguided Israeli and Hamas leaders who have been dangerously misleading their publics, fearing for their own political survival rather than the welfare and security of their respective communities.

The internal crisis in Gaza is sickening and goes beyond the pale of human misery. Poverty is rampant, clean drinking water is scarce, sewage flows into the streets, infrastructure is crumbling, electricity is infrequent, medical care is lagging, joblessness is debilitating, education is substandard, and hopelessness fills the air.

Instead of focusing on these appalling social and economic ailments and alleviating the public’s suffering, Hamas is investing hundreds of millions of dollars into building tunnels, procuring and manufacturing weapons, and training thousands of fighters to fight yet another losing war. Its leadership is peddling a distorted narrative to mislead the public, promoting resistance against Israel as the way for their people to find salvation.

Hamas wants the blockade to be lifted but is unwilling to renounce violence as a tool by which to achieve its political objective to create a Palestinian Islamic state. It is demanding the Palestinian refugees’ right of return, knowing that such a demand is a non-starter—no Israeli government, regardless of its political orientation, will ever consider it, as it would obliterate Israel’s Jewish character.

To reinforce its political agenda, Hamas’ charter openly calls for Israel’s destruction, knowing full well that such a goal is nothing but a pipedream that plays into the hands of Netanyahu’s right-wing government. Besides, should Hamas ever threaten Israel’s existence, it will not survive another day.

To be sure, Hamas blames Israel for the Palestinians’ plight while making absurd demands purely for public consumption, knowing that none of their claims will ever come to fruition given Israel’s rejection of any concessions, so long as Hamas sticks to its positions.

The Netanyahu government’s policy toward Hamas does not fare much better. It is based on the premise that Hamas is simply an irredeemable group of Islamic militants, and blames the miserable conditions in Gaza on its leadership. As such, Netanyahu and his partners found it convenient to assume no responsibility, knowing that the status quo cannot be sustained and that the current violent confrontation was all but inevitable.

Nevertheless, the Israeli government did little to alleviate the situation and linked any easing of the blockade to Hamas’ laying down their arms, recognizing that such a demand is tantamount to surrender that Hamas will never accept. Besides, Netanyahu and his hardline coalition partners resigned themselves to the notion that violent eruptions in Gaza will occur time and again, and Israel’s only option is to quell it by force and wait for the next round.

Finally, to gain public support, Netanyahu, who is a master manipulator and fearmonger, gives much credence to Hamas’ occasional public protestation that its ultimate goal is to establish an Islamic state that will control all of mandated Palestine, Israel included.

The problem is that neither the Netanyahu government nor Hamas are willing to accept the reality on the ground—coexistence—which is not subject to change short of a catastrophic event. The question is how to go about finding a solution to their conflict in the context of the inevitabilities on the ground.

Given that the subhuman conditions in Gaza are intolerable and that violence is bound to explode time and again, Israel should be concerned about its moral responsibility as well as its national security. For Hamas, time is running out; they can no longer ride on the backs of the poor, despondent, and despairing Palestinians and place the blame solely on Israel. The majority of Palestinians in Gaza no longer buy into that argument. They want relief, and they want it now.

I doubt very much if at any time in the foreseeable future Hamas and the PA can find a common path that could lead to the establishment of a functioning Palestinian state. For this reason, instead of exploiting Palestinian disunity, the Netanyahu government should turn its attention to Hamas and deal with it as a separate entity in Gaza. Indeed, Hamas is separated both ideologically and geographically from the PA and the West Bank. It is functioning in Gaza like a state and Israel should recognize it as such, regardless of the ultimate disposition of the West Bank.

What is needed then is a process of reconciliation between Israel and Hamas, which must begin with the cessation of all hostilities. If Hamas wants to have the blockade lifted, it must first renounce violence. The lifting of the blockade will have to be gradual but consistent and correspond to Hamas’ behavior. Hamas should demonstrate that its renunciation of violence is permanent by ending the building of tunnels and the continuing augmentation of its arsenals. Indeed, only a fool among Hamas’ leaders believes that Israel would otherwise lift the blockade even partially while Hamas continues to threaten its very existence.

On the other hand, Israel’s demand that Hamas must first surrender its weapons as a precondition to even gradual lifting of the blockade is tantamount to surrender, which Hamas cannot realistically accept. The easing and eventual lifting of the blockade should be subject to confidence-building measures and the continuing process of reconciliation, which would lead to the demilitarization of Gaza with the support of Egypt, who is also keen on disarming Hamas.

Israel must accept the reality that Hamas is there to stay, and given the fact that Israel has the upper hand, it can take some reconciliatory steps and change the combustible nature of the conflict without risking any element of its security. Moreover, given the growing tension between Israel, Iran, and Hezbollah, mitigating the struggle with Hamas will allow Israel to focus on the northern front, which is far more ominous than the conflict with Hamas.

If reconciliation between Israel and Hamas continues on a steady basis, it could eventually lead to the establishment of a seaport and airport in Gaza, along with assistance from Israel in building desalination plants. These conditional reconciliatory steps toward Hamas will also give Israel leverage over the West Bank in future negotiations, regardless of who leads the PA.

Anyone who is familiar with the internal thinking of Hamas and the Israeli government knows that both sides have resigned themselves to the unshakable reality of each other. Israel and Hamas have negotiated directly and indirectly on many occasions; they know each other’s limitations, and what it would take to break the impasse and pave the way for future substantive negotiations.

Israel and Hamas must drop any demand that cannot realistically be met, as it only casts serious doubts about each other’s ultimate intentions. Sadly, though, Gaza and Israel are led by hardline leaders who are wedded to the past, including Israel’s Netanyahu and Bennett, and Hamas’ Ismail Haniyeh, Yahya Sinwar, and others. They fear any change in direction that risks their position of power, which is to the detriment of their people.

Under any circumstances, however, the process of reconciliation is not only possible; it is the only way for both sides to get out of the morass they find themselves in. To be sure, regardless how many more violent conflicts they endure, they will still face one another, surveying, as in the past, their human and material losses rather than their gains, all to no avail.