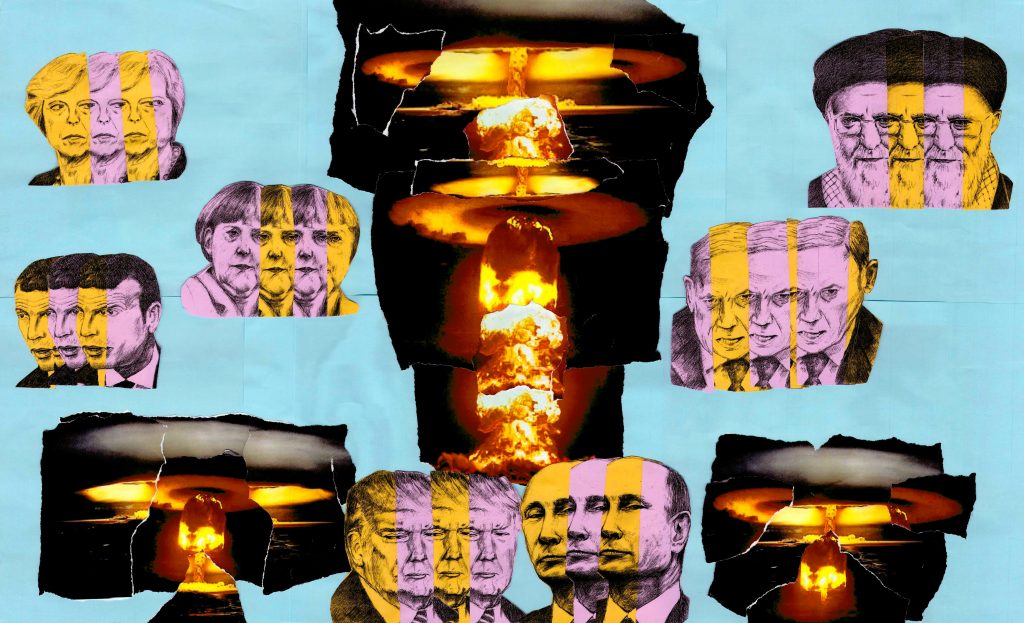 This article is a short excerpt from my latest essay, Preventing an Israeli-Iran War, published in the May 2019 issue of American Diplomacy. The full-length essay is available here.

Accusing Iran of being a rogue country bent on acquiring nuclear weapons, supporting extremist groups and terrorism, persistently threatening Israel, and destabilizing the region in its relentless effort to become the dominant power may well all be justified. The question is, what would it take to stop Iran from its destabilizing activities and help make it a constructive member of the international community, and avoid military confrontation with either the US or Israel or both?

The answer is not regime change, as Israeli Prime Minister Netanyahu and top American officials advocate, but a diplomatic solution. The EU, led by France, Germany, and the United Kingdom – who continue to adhere to the JCPOA – should initiate a behind-the-scenes dialogue and pave the way for US involvement in a negotiating process with Iran to find a peaceful solution and prevent a disastrous military confrontation.

Should the Trump administration remain adamant on regime change, it is more than likely that one of the following scenarios will unfold, which could lead to a catastrophic development.

Bellicose narrative leads to violence: The threats and counterthreats between Iran and Israel could lead to miscalculation, resulting in an unintended outbreak of a catastrophic war that neither side wants nor can win. As it continues to escalate, such narratives also create a public perception both in Israel and Iran that military confrontation may well be inevitable. As a result, both countries would become entrapped by their bellicose narrative against one another, in which any incident perceived to threaten the national security of either side could trigger a devastating military confrontation.

Rhetoric like the statements by a senior Revolutionary Guard commander, declaring on the occasion of the 40th anniversary of the Iranian revolution that “if they [the United States] attack us, we will raze Tel Aviv and Haifa to the ground”, and Netanyahu’s response that if Iran attempts such an attack, it will fail and “…this would be the last anniversary of the revolution that they celebrate”, should be avoided.

Attacks in Syria spark further conflict: Israel’s continuing attacks on Iranian military installations in Syria, from which Iran has sustained heavy losses, could pressure Iran to retaliate as it will no longer allow itself to be humiliated now that these attacks are in the open. Iran’s tendency to overly exaggerate its military prowess, which it has come to believe in, and Israel’s psychologically rooted fear of existential threats, narrows the space of reasonable discourse.

The problem here is that Israel’s determination not to allow Iran to establish permanent military bases in Syria, and conversely Tehran’s resolve not to cut its losses and leave, shortens the time before an outright military confrontation could occur. These conditions are further aggravated by Trump’s support of Netanyahu’s military campaign against Iran in Syria, bringing Israel and Iran ever closer to the precipice of war.

Effecting regime change in Iran: Trump’s desire to effect regime change – by imposing sanctions to dislocate the Iranian economy and instigate public unrest, while trying to isolate Iran internationally – could create chaotic conditions in the country, but it does not guarantee that regime change will in fact be realized. Unlike the US’ successful attempt in 1953 to topple the then-Mosaddeq government, in today’s Iran the clergy is far more entrenched in every aspect of life.

Although Iranians are suffering and ordinary people take a serious personal risk by demonstrating against the government and demanding change, this public pressure is not enough to unseat the government, as the Trump administration is hoping for. It does, however, push the government to search for new avenues to alleviate the worsening economic conditions.

The mullahs have shown an inordinate capacity to ruthlessly quell any public unrest, and it can count on the powerful Islamic Revolutionary Guard Corps (IRGC) to safeguard the survival of the clergy, because in protecting the mullahs, the Guard protects its own elite position. This mutuality of interests and dependency explains why the clergy allocates a significant portion of Iran’s national budget to the Guard, regardless of the overall economic hardship from which the public suffers.

Waging a premeditated war against Iran: This is the worst option of all, as there is simply no way to predict the ultimate outcome. To suggest, as some Israelis do, that a surgical attack on Iran’s nuclear facilities carried out jointly by the US and Israel will not necessarily evolve into a regional war displays a clear lack of understanding of the Iranian psychological and political disposition. Regardless of cost, Iran will retaliate against US targets and allies in the region, which could plunge the Middle East into a devastating war from which no one will escape unscathed.

Given the fact that no war could obliterate Iran, and Israel’s low threshold for casualties, any Iranian attack on Israel in the course of a war that results in the death of thousands of Israelis while inflicting massive destruction may well force Israel to resort to the use of WMDs. This option becomes even more realistic should Israel conclude with certainty that Iran is posing an imminent existential threat. For this reason, no sane Israeli or American should even contemplate a premeditated war and must stop short of nothing to prevent an accidental one.

The February 2019 Warsaw conference revealed disunity and disagreement between the US and its allies in addressing the Iran problem. Although it was ostensibly convened to address the crises sweeping the Middle East, the focus quickly shifted to Iran, which was the intent of the US in the first place. The Trump administration wanted to rally the international community behind its confrontational policy toward Iran, to which the European countries objected, as was manifested by the low-level delegations they sent to the conference.

For Iran, this display of disunity provided it the opportunity to take full advantage of the Western alliance’s discord and trade with many other countries to compensate for American sanctions. However, the EU must make it clear to Tehran that it cannot count on the discord to last indefinitely. Conversely, Germany, France, and the UK ought to persuade the US that its confrontational approach will not work. Secretary of State Pompeo’s unabashed statement that “you can’t achieve stability in the Middle East without confronting Iran”, a position that Netanyahu echoed the day after, will only heighten the tension and draw them ever closer to a military confrontation.

The EU must initiate behind-the-scenes negotiations with Iran, if it hasn’t already, and along with the US, develop and agree upon a joint cohesive strategic plan to mitigate the conflict with Iran based on the carrot-and-stick approach. The new negotiations should be based on quid pro quo aiming to achieve a comprehensive deal in stages to enhance mutual credibility and build trust.

Every conflicting issue must be placed on the table and a solution to any such issue, for example, an agreement on freezing Iran’s research and development of ballistic missiles, is reciprocated by lifting a specific set of sanctions from which Iran can derive immediate benefit. To be sure, Western powers should offer Iran a path for normalization of relations, removing sanctions, and assurances that the West will not seek regime change.

In return, Iran must stop meddling in the affairs of other states, supporting extremist groups such as Hezbollah, threatening Western allies, and waging proxy wars in Yemen and Syria while undermining their geostrategic interests. Moreover, Iran must provide a full account of its nuclear weapons history and present all information pertaining to its nuclear facilities and equipment, as was uncovered by the archives seized by Israel, along with the technology and materials that it has hidden from the international monitors.

This kind of cooperation and high level of transparency will serve the objective of reaching regional stability from which Iran can benefit greatly, instead of continuing its nefarious activities which invite condemnation, sanctions, and potentially war.

Pierre Vimont, senior fellow at Carnegie Europe, observes that “These different challenges all boil down to the issue of a regional security arrangement for the whole region. Highly ambitious indeed, but the response to the current mistrust between Iran and its neighbors can only come from a clear perspective of where this whole region should be heading to ensure a sustainable stability.”

There is nothing in the current crises with Iran that cannot be resolved through negotiations. But the continuing threats and counter-threats will gain increasing traction and make the risk of waging a war preferable to the consequences of allowing Iran to continue its destructive behavior.