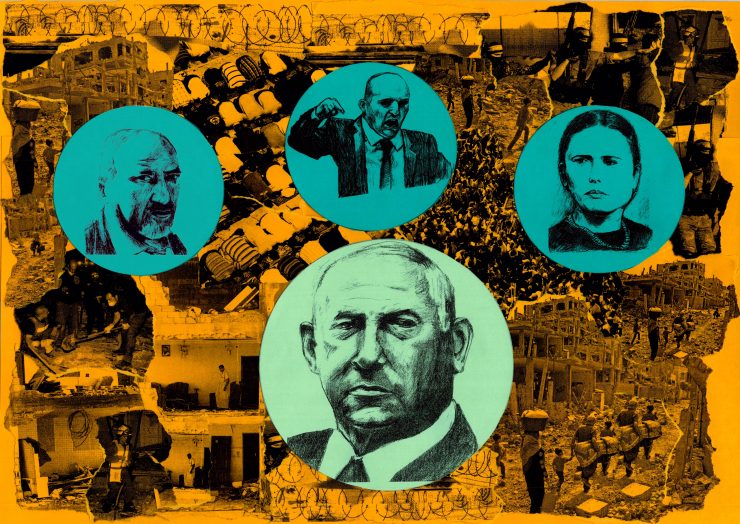 The geopolitical developments in the Middle East over the past fifteen years have created new political and security dynamics engendered by the violent turmoil and profound concerns over the Iranian threat, shared by Israel and the Arab states. Israel is now facing a new critical juncture: continue with its oppressive occupation and creeping annexation of Palestinian land, which stands in total contrast to its moral responsibility and Jewish values; or seek a peace agreement with the Palestinians in the context of an Arab-Israeli comprehensive peace, which the Arab states seek now more than any time before because of their domestic and foreign security concerns.

The current government, led by Netanyahu with the support of three radical ministers, Lieberman, Bennett, and Shaked—who hold the key ministries of Defense, Education, and Justice respectively—relishes the new geopolitical environment. They complement each other by developing a defense posture, biased educational curriculum, and skewed public narrative while weakening the judiciary, with Netanyahu orchestrating the long-term strategy that denies the Palestinians a state of their own.

Blinded by the euphoria created by Trump’s recognition of Jerusalem as Israel’s capital, and the near-unimpeded expansion of settlements and annexation of Palestinian land, the ministers feel confident that the occupation is no longer a major concern to the Arab states. And with the unwavering backing of Trump, they are assuming a free hand to do what they choose with impunity. They are tragically wrong.

Israel must now seize the momentous, time-sensitive opportunity provided by the changing geopolitical regional dynamic precipitated by the common Iranian threat against Israel and the Arab states. The leading Arab states, especially Saudi Arabia, Egypt, Jordan, and the Gulf states, view Israel today as a strategic ally rather than an enemy, which presents Israel with two options:

The first is to make further territorial gains by building new, expanding existing, and legalizing illegal settlements, which will basically foreclose any prospect of reaching an Israeli-Palestinian peace agreement based on two states. This will not stop the Arab states from cooperating with Israel because of their preoccupation with domestic and foreign threats, which assumes priority over the Palestinians’ aspiration for statehood.

The relatively mute reaction to Trump’s recognition of Jerusalem as Israel’s capital only reinforces the view that the Arab states’ anxieties about the Iranian threat takes precedence, even over such a sensitive issue as the future status of Jerusalem.

That said, although the Arab states want to normalize relations with Israel, they will not do so because that would be seen as a blatant betrayal of the Palestinian cause which they have championed for decades. Instead, they would (continue to) maintain tacit strategic cooperation with Israel against Iran, which they need, but deprive Israel of a comprehensive peace which the Israelis greatly seek.

The second option for Israel is to capitalize on its current state of relations with the Arab countries by reaching out to the Palestinians to resume serious peace talks. This may well be a historic opportunity because the Arab states, who want to maintain their strategic cooperation with Israel, are now predisposed to pressure the Palestinians to make important concessions to Israel, especially on national security, refugees, and land swaps.

The current conditions provide a rare opportunity to reach a peace agreement that can be implemented over a long period of time (ten years or more), during which both sides can develop trust (which is sorely lacking) through joint socio-economic projects while cementing security arrangements and cooperation.

By establishing a Palestinian state, Israel will end its human rights violations and stop the continuing moral erosion precipitated by the occupation, which has infected the country for five decades and severely undermined Jewish values and humanitarianism. These values were the very secret behind Jewish survival throughout the millennia, even though they were subjected to discrimination, persecution, expulsion, and death.

As Rabbi Daniel Polish eloquently stated in his writing “Judaism and Human Rights”, “The system of values and ideas [on which human rights are based] are among the beliefs which constitute the very core of Jewish sacred scripture and the tradition of ideas and practices which flows from it…”

At their core, Netanyahu and his company are dedicated to the idea that God bequeathed the “Land of Israel” exclusively to the Jews, which justifies taking any measure, however wrong and humanly abusive, to secure the land in perpetuity in the name of God. They have become oblivious to the fact that “Human rights are an integral part of the faith and tradition of Judaism.”

The right-wing segment of the Israeli population views the development of events between Israel and its Arab neighbors, and the US’ recognition of Jerusalem as Israel’s capital, as proof of the unassailability of the Netanyahu government’s judgment and policies. But there is nothing further from the truth.

If these policies could, in fact, lead to a comprehensive peace, I’d say, stay the course. But given the volatility of the Middle East, today’s friends may well become the foes of tomorrow. This is a prospect that the Netanyahu government cannot ignore.

Without striking a peace agreement with the Palestinians and the rest of the Arab states, Israel will leave itself vulnerable to the changing geopolitical environment. Can Netanyahu, Lieberman, Bennett, and Shaked guarantee they can indefinitely frame the development of events in the region to Israel’s advantage?

There is no real adversary today that can potentially destroy Israel. Israel’s greatest enemy comes from within—its misguided leaders, whose blind messianic mission will be behind the destruction of Israel as a Jewish and democratic state.