Israeli-Hamas Truce: An Opportunity In Disguise 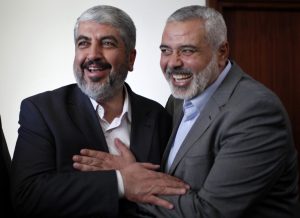 Israel and Hamas are reportedly discussing a long-term truce. Although Israeli officials claim it is merely a rumor and that there are no direct or indirect negotiations with Hamas, many signs suggest that a deal is imminent. Whether or not such a deal is being negotiated, however, Israel and Hamas should aggressively pursue it as both can greatly benefit from it on several levels. The Palestinian Authority’s (PA) objection to the truce, characterizing it as a kiss of death to the two-state solution, is completely misplaced. The prospective truce has critical strategic implications that could markedly advance the overall Israeli-Palestinian peace process.

The truce should come as no surprise to anyone given the situation in Gaza in the wake of the last Hamas-Israel war in the summer of 2014 and the terrible devastation that the Palestinians in Gaza sustained, not to speak of the changing political winds in the region.

Hamas has come to a different conclusion, realizing that Israel is an unshakable reality and has begun to look for ways to accommodate the Israelis in return for easing the blockade and eventually lifting it altogether.

What has added urgency to Hamas’s change of direction is the Palestinian public’s mounting pressure, demanding an end to the conflict with Israel which robbed three generations of their basic right to live with dignity and left them with no prospect for a better future.

Notwithstanding Israeli Prime Minister Netanyahu’s denial, in recent months, Israel and Hamas entered into secret negotiations to work out a permanent ceasefire. Simultaneously, Israel began to ease the blockade, creating a much more conducive atmosphere to further the negotiations about a long-term truce.

Once the temporary informal ceasefire was established immediately after the last war, both Israel and Hamas carefully observed it. In fact, Hamas’ internal security personnel have systematically been arresting and sometime shooting to kill jihadists who violate the ceasefire.

Although many on both sides characterize the new phase between Israel and Hamas as a “coexistence of convenience,” Hamas does not seek another violent conflagration with Israel, knowing that challenging Israel militarily again will only bring more ruin and less relief.

There are several reasons behind Hamas’ and Israel’ desire to establish a longer-term truce (expected to last 8-10 years) which further explains why it may well become inevitable, as it has many significant advantages to both sides.

For Hamas, the truce will:

Allow Hamas to assert its political governance over Gaza and distance itself from the PA without compromising their ‘official’ position regarding the Israeli-Palestinian conflict;

Allow for economic recovery through substantial reconstruction of the devastated areas in Gaza following last summer’s war with Israel, and gradually end the blockade;

Provide job opportunities in Gaza, allowing thousands of Palestinian day laborers to work in Israel while expanding trade in both directions;

Permit Hamas to build a floating port off the coast of Gaza and guarantee naval passage between Gaza and Northern Cyprus, monitored by Turkey; and

Improve and eventually normalize relations with Egypt, maintain an open border crossing, and provide the Palestinians an opening to the Egyptian market.

Finally, given the growing tension between the Arab Sunni world and Shiite Iran, Hamas’s leadership concluded that regardless of its closeness to Iran, it must cast their lot with their Sunni brethren.

For Israel, the truce would prevent another war, and serves to:

End the firing of rockets on Israel that cause tremendous disruption in the lives of Israelis;

Require Hamas to stop digging new tunnels to smuggle weapons and prevent any other extremist groups from attacking Israel;

Keep Gaza and the West Bank physically separated, thereby deepening the gulf between the PA and Hamas, following the dictum of “divide and conquer,” which also explains why Netanyahu refused to negotiate with the Palestinians’ ‘unity government’ but does now with Hamas alone;

Ease the mounting international pressure on Israel to gradually remove the blockade, as most EU member states and the US want to see an end to suffering of the Palestinians in Gaza; and

Allow Israel to reduce the operational cost of maintaining military vigilance on the Gaza border, which heavily taxes its fighting forces, and do so without giving up any territory and potentially saving lives.

Finally, being that Turkey has always been against the blockade and is now directly involved in the negotiations, the truce would dramatically improve Israel-Turkey bilateral relations, which have been severely damaged by (among other things) the continuation of the Israeli blockade.

I maintain that the PA’s rejection of the prospective Israeli-Hamas truce is completely misplaced. Indeed, regardless of the political leaning of any Israeli government, it would not negotiate with the Palestinians and give up more territory as long as violent hostilities remain common and Hamas’s threat is persistent.

Ironically, PA President Abbas, who has consistently supported any Israeli-Hamas ceasefire, has now come out against it because the negotiations did not involve the PA and because of his fear that the truce would usurp the PA’s political authority over Gaza, which does not exist in reality.

Fatah spokesman Ahmed Assaf put the PA’s concerns bluntly: “[An Israel-Hamas deal] would achieve Israel’s strategic goal of killing the idea of establishing an independent Palestinian state on the 1967 borders with Jerusalem as its capital. Hamas wants to win Israeli recognition at the cost of the Palestinian national project.”

On the contrary, the truce with Hamas would allow for a cooling period and give the Israelis more confidence in subsequent negotiations with the PA. The PA leadership would be wise not to try to torpedo the prospective truce, which would enforce the Israeli argument that ‘there is no partner for peace.’

To enhance its survivability, once the truce is established, the US and the EU should remove Hamas from their terrorist lists and allow it to have greater freedom of movement, as long as it fully adheres to the terms of the truce.

The truce will help Saudi Arabia to establish a broad Sunni alliance from the Gulf to the Mediterranean to counter Iran’s parallel Shiite crescent, and inhibit Tehran’s ambition to become the region’s hegemon.

The truce would put the Arab states, especially Saudi Arabia, Qatar, and Egypt, in a position to exert political and material pressure on Hamas to formally adopt the Arab Peace Initiative (API). The API provides several common denominators between Israel and Hamas about the principle idea of a two-state solution, and offers Hamas’s leadership a face-saving way out.

Consistent with the API, on more than one occasion Hamas clearly stated that it is willing to negotiate a peace agreement with Israel based on the 1967 borders. The truce could further nudge Hamas in that direction.

Finally, the truce could also lead to Hamas’ acceptance of the Quartet’s three requirements: recognize Israel, renounce violence, and accept prior agreements between Israel and the Palestinians.

To be sure, the prospective Israeli-Hamas truce presents a momentous opportunity, albeit in disguise, for all parties concerned to turn a new page in the Israeli-Palestinian conflict and change its geopolitical and security dynamics, which succeeding Israeli and Palestinian governments could build on.