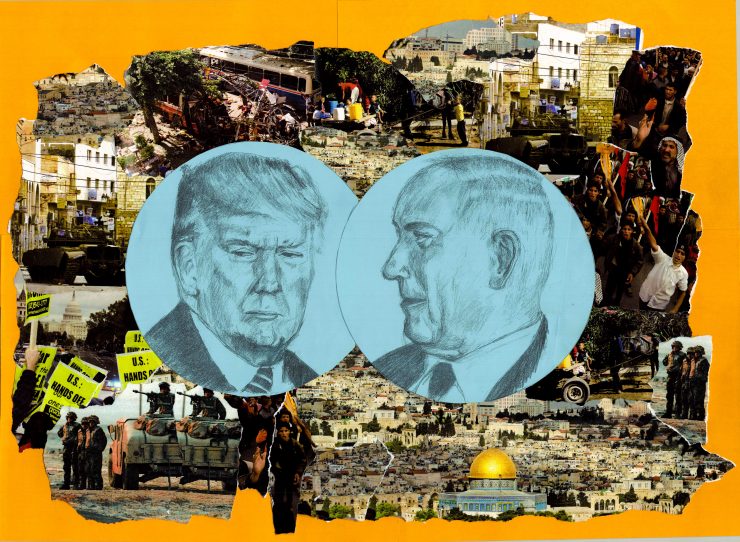 The US’ Enablement Jeopardizes Israel’s Future

The United States has been and remains the staunchest supporter of Israel, and its unqualified support will cause significant damage to Israel’s future wellbeing. The US’ continued political, military and economic backing has enabled Israel in the past to maintain the occupation and create new political and physical conditions in the West Bank that have severely undermined, if not destroyed, the prospect of a two-state solution.

Every Israeli government, regardless of its political composition, took the US’ support for granted, believing that no American administration would take any punitive action even if Israel acted contrary to the US position regarding the Israeli-Palestinian conflict. This gave successive Israeli governments the freedom to formulate and act on policies in the West Bank with impunity. Even President Obama, who exerted some pressure on Netanyahu’s government to halt the expansion of settlements, ended up providing Israel with $38 billion for military assistance over ten years with no strings attached.

There are several reasons behind the US’ unhindered support of Israel. Of paramount importance is the political support of the evangelicals, who are staunch supporters of Israel as they believe it to be the conduit for the return of the Messiah. They represent a significant voting block (72 million registered voters), without which no one is assured of winning the presidency. Neither the Republicans nor the Democrats could outright win control over the House and the Senate without the support of the evangelicals’ rank and file.

Moreover, the US and Israel have developed over the past five decades wide-ranging collaboration on several fronts: close strategic cooperation to ensure Israel’s security while furthering the US’ economic and strategic interest in the region; intelligence sharing; military coordination; and extensive collaboration in the fields of science and technology, among many others.

Added to that is the shared social and political values buttressed by America’s moral commitment to Israel’s survival, as well as the traditional support of the American Jewish community, many of whom enjoy noteworthy influence on members of the House and the Senate through financial contributions to their political campaigns. Finally, the US and Israel both identify Iran as a major destabilizing regional power, sharing a resolve to prevent it from realizing its nuclear and regional ambitions.

This explains why US support of Israel continues unabated, despite their differences in connection with the Israeli-Palestinian conflict. The most glaring example is the Israeli settlements, which successive administrations characterized as a major obstacle to peace, but failed to exert any pressure on Israel to stop building new and expanding existing settlements.

The advent of the new administration made matters worse. Even though Trump wants to facilitate an Israeli-Palestinian peace agreement, he neither supports nor objects to a two-state solution and has left it up to Israel and the Palestinian Authority to decide which way to go. This sent a clear signal to the Netanyahu government that the US is no longer committed to a two-state solution, leaving him to gradually undermine any prospect left to that end.

Moreover, Trump’s decision to freeze financial aid to UNRWA was shortsighted and played directly into Netanyahu’s hand—losing much of the US’ leverage to pressure the PA to return to the negotiating table. Thus, instead of utilizing the recognition of Jerusalem to advance the peace, Trump alienated the Palestinians while further enabling Netanyahu to stay his course.

The American unwillingness to force Israel to change direction not only undermined the prospect of a two-solution, but thrust Israel into a precarious existence. As such, a growing number of Jews in and outside Israel have become disillusioned about Israel’s future and its reason for being. Israel is progressively becoming a hard-core nationalist state, with the orthodox Jews and settlers gaining ever more influence in all government and private institutions.

For Israelis, American political, economic, and military support is all that matters. The failure of successive American administrations to use these levers to compel Israel to change its policy toward the Palestinians only emboldens the Israelis to pursue territorial expansionism without fearing any punitive action from its most critical benefactor.

Moreover, even though the US has had a fairly clear framework for a peace agreement in mind, it has irresponsibly allowed the Israelis to change the territorial and political dynamic in the West Bank without modifying its policy toward Israel to correspond to its general framework for a two-state solution.

Given the fact that only the US can exact the necessary concessions needed to make peace, the US enabled Israel to pursue an ill-fated policy toward the Palestinians. By its unwillingness to exert pressure to stop the settlements enterprise, it scuttled any prospect of reaching a peace agreement. Sadly, the US’ domestic political considerations, compounded by the current miss-assessment of the Trump administration regarding the importance of Israeli-Palestinian peace to regional stability, will continue to override a sound policy toward Israel to save it from its self-destruction.

Three more years of misguided political backing by the Trump administration could inflict a fatal blow to Israel, rendering the country neither Jewish nor democratic. Those Israelis who are cheering Trump’s rise to power should be careful what they wish for.

Further enablement of Israel by the US will be the kiss of death to an Israeli-Palestinian peace and will make Israel a pariah state surrounded by walls and fences, constantly threatened and living by the gun.