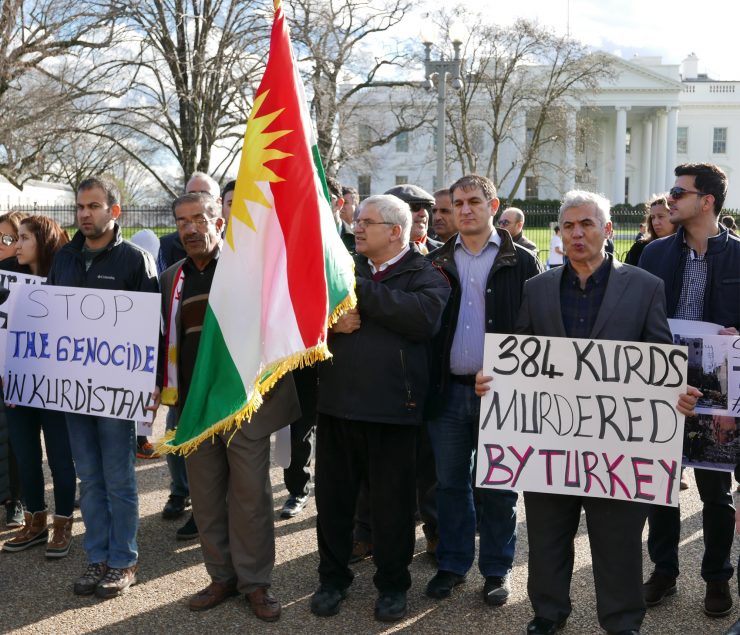 Trump’s decision to withdraw American forces from Syria may well be remembered as one of the most egregious and inhuman disasters that he has ever taken since he came to power. For a President of the United States to make such a critical decision with so many implications, simply based on a conversation with Turkish President Erdogan, not only shows his shortsightedness and total lack of strategic approach, but his inability to appreciate how that will adversely affect our friends and please our foes. We are already witnessing the unfolding disaster, and there are no words to explain how and by what logic the President of the United States in particular can take such critical steps, knowing how disastrous the repercussions of his actions would be.

We are already witnessing the humanitarian disaster that has been inflicted on the Kurdish community in Syria. They are the very same Kurds who have fought courageously and valiantly against ISIS and suffered thousands of casualties, demonstrating their commitment to fight to the end, at which they have largely succeeded. The last thing that any Kurdish fighter could imagine is for the United States to betray them, having demonstrated their loyalty at a terrible cost with horrifying losses.

It is true, of course, the Kurds have not merely fought to support the US or other allies’ efforts in the war against ISIS, but also for their own self-defense, protecting their land and people. And now, they are fleeing by the thousands – nearly 65,000 have already fled, and aid groups expect as many as 450,000 to flee. More than 300 have already been killed by the vicious and ruthless Turkish military under the fanatic and zealous orders of Erdogan.

Interestingly, while Republicans have thus far accepted and even embraced Trump’s follies on scores of domestic and international issues, they have not done or said hardly anything against his repeated egregious actions, lies, misstatements, and self-indulgence. This time, they finally raised their voices and condemned the precipitous withdrawal from Syria. They understood how dire the regional consequences will be in particular for America’s allies throughout the Middle East.

No single ally in the region and elsewhere will be able to trust the United States under Trump to do anything on their behalf, let alone take any critical steps that might be needed to protect their national security. Senator Lindsey Graham (R-SC), one of Trump’s fervent backers, stated “The president has abandoned the people who helped us destroy ISIS, chaos is unfolding, and when I hear the president — ‘We’re getting out of Syria’ — my statement to you is this is worse than what Obama did [in withdrawing from Iraq].”

The Middle Eastern countries who have direct or indirect interest and concern about what’s happening in Syria, especially Saudi Arabia and Israel, certainly feel abandoned. They know firsthand that the result of the American withdrawal from Syria will have serious national security implications for them, as it would affect their long-term geostrategic calculus in a region with continuing upheaval.

Netanyahu has expressed Israel’s concern over the situation, stating “Israel strongly condemns the Turkish invasion of the Kurdish areas in Syria and warns against the ethnic cleansing of the Kurds by Turkey and its proxies. Israel is prepared to extend humanitarian assistance to the gallant Kurdish people.” Erdogan’s office lashed out, with communications director Fahrettin Altun replying, “Empty words of a disgraced politician looking at many years in prison on bribery, fraud and breach of trust charges.”

The reaction of the European community, and scores of other countries throughout the world, has been one of disbelief. French President Emmanuel Macron, taking stock of the situation, warned “Turkey is putting millions of people at humanitarian risk. In doing so, Turkey will be responsible in front of the international community for helping Daesh (so-called Islamic State) building a Caliphate.”

For Trump to take this kind of action that directly impacts the European interests in the region, without any consultation, amounts to betraying our closest European allies. Trump never understood that because of Europe’s proximity to the region, it will be affected directly and indirectly by the regional turmoil. For that reason, they have fought side-by-side the United States in the Middle East and Central Asia, even though at times they disagreed with American strategy. They made these sacrifices and commitments to preserve the alliance with the United States, and the integrity of NATO.

Needless to say, the countries that benefit the most from this ill-fated decision by Trump are Turkey itself, Russia, and Iran. Turkey’s invasion of Syria will simply not end by defeating the Kurds; Erdogan will ensure that Turkey remains permanently in Syria, as this was all along part of his sinister strategic ambition.

Iran will further entrench itself in Syria, and regardless of what Israel will do or say, there will be no prospect of Iran leaving, knowing the United States will not only refrain from using any military force to oust Iran, but it will no longer have much say about the future of Syria itself. Moreover, there is no other power that could compel Tehran to abandon its strategic interest in Syria under almost any circumstances, which terrifies the Israelis.

Russia, who has been entrenched in Syria for five decades, has worked closely with Iran and Turkey. It should be noted that Putin, Erdogan, and Rouhani have met several times in the last 18 months and developed their own scheme about Syria’s future. It is quite clear that Putin and Rouhani certainly supported Erdogan’s invasion, which explains why neither Russia nor Iran have said one word about Turkey’s gross transgression.

It is no secret that Trump’s decision was also largely motivated by his financial interest in Turkey, which goes back many years to 2012, with the opening of Trump Towers in Istanbul. To think though, that the President of the United States would sell America’s interests and abandon its allies for the sake of personal financial gain is not merely outrageous but criminal. To me, this amounts to nothing less than treason.