There is no wonder that every person and news outlet that saw Trump’s letter to Turkey’s president Erdogan thought it was a joke. When it was confirmed that the letter was indeed authentic, bewilderment and disbelief struck everyone who read it, as no US president has ever written such a disgraceful letter which will be… 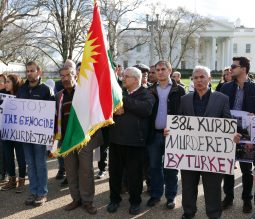 Photo by Susan Melkisethian Trump’s decision to withdraw American forces from Syria may well be remembered as one of the most egregious and inhuman disasters that he has ever taken since he came to power. For a President of the United States to make such a critical decision with so many implications, simply based on…

Self-Determination Is An Inalienable Right

The Iraqi Kurds’ referendum that was conducted several weeks ago won an overwhelming majority in favor of independence, but was rejected by much of the international community, especially by the US and the Iraqi government. Self-determination, however, is unstoppable because it is a core of human rights. No power can indefinitely prevent any group from…

The Iraqi Kurdish referendum vote for independence, scheduled for September 25, is more than likely to pass by an overwhelming majority of the Kurdish population. Sadly, however, not a single country (with the exception of Israel) expressed its support for the Kurds’ impending historic decision to finally realize their decades-old dream of establishing a state…

The Kurds’ Treatment In Turkey Is Indefensible

The below article is a response to a public letter written by Ibrahim Kurtulus, criticizing my previous article about the plight of the Kurds in Turkey. Kurtulus is a member of the Federation of Turkish American Associations, Inc. You can find a link to his letter in full here. Given the plight of the Kurds…

Regardless of what may come out of Kofi Annan’s peace plan to end the internal conflict in Syria, and whatever may emerge from the Arab League meeting this week in Baghdad, the prospect of Assad’s fall offers the Kurdish minority in Syria a historic opportunity to gain equal political and civil rights. Given the totalitarian nature of Baathist rule under Assad, the regime’s fall in Syria will take the entire system of government down with it, much like Saddam’s Iraq in 2003. But unlike Iraq’s Kurds who have enjoyed virtual autonomy since 1991 when the United States enforced a no-fly zone over northern Iraq, Syria’s Kurds are less organized and more divided. Syrian Kurds need to close ranks, fully join the Syrian people in pursuit of freedom, and not allow this historic window of opportunity to slip away.