Israelis And Palestinians Cannot Make Peace On Their Own 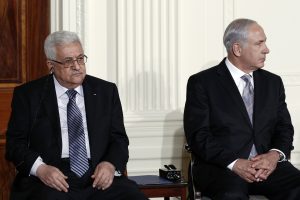 The enduring impasse between Israel and the Palestinians in the peace negotiations and their changing internal political dynamics has made it impossible for them to resolve the conflict on their own. Leaving them to their own devices is no longer a viable option as the continuation of the conflict is hazardous and potentially explosive. The resumption of bilateral peace negotiations with US mediation alone will not succeed any more than the Obama administration’s two previous efforts. The floating idea that France may present a United Nations Security Council (UNSC) resolution to coerce both parties to resume negotiations, with the support of the United States, will be necessary to break the impasse.

Israel: The steadily increasing popularity of the right-of-center in Israel made it nearly impossible, due to ideological and religious reasons, for any right-wing government to negotiate a peace agreement, which of necessity requires major concessions that it is not willing to make.

Prime Minister Netanyahu or any other staunch right-wing ideologue may talk about a two-state solution to appease the international community and the political center in Israel, but they have no intention of entering into serious direct peace talks with the Palestinians that could potentially lead to a two-state solution.

In fact, even if Netanyahu decides to negotiate and make certain concessions that could point to the creation of a Palestinian state, his coalition government will immediately unravel.

Many members from his own party will defect, and certainly the extremely conservative Jewish Home party led by Naftali Bennett, who will under no circumstance agree to the creation of a Palestinian state and end the occupation.

Assuming that new elections are held in Israel and the center and left-of-center parties form a new coalition government, such a coalition will still be unable to strike a peace agreement without the support of one of the religious parties and moderate members of Likud.

It is critically important to note that successive Israeli governments across the political spectrum have been beholden to the settlement movement, which is fully embedded in every branch of government and exercises tremendous influence on the military establishment as well.

Thus, no Israeli government, regardless of its political makeup, will be in a position to deliver the necessary concessions, especially in connection with Jerusalem and the disposition of the settlements.

What further complicates the Israeli-Palestinian conflict is the Israeli political system, which inherently promotes the birth of new parties every time there is an election due to the low parliamentary threshold of only 3.25 percent to be eligible to elect one or more members to the Knesset.

Since the creation of Israel, no political party has been able to muster a majority vote to form a government on its own. As a result, the party that garners a relative majority ends up forming a coalition government composed of several parties.

Forming such a coalition government often requires the leading party to make significant concessions to other coalition partners and almost always end up agreeing on the lowest common denominator on many vital issues, especially in connection with the Palestinian conflict.

Given this level of political dysfunction within Israel, it is no wonder that even left and centrist parties have been unable to form a government in which there was complete consensus about the peace process and the desired outcome.

Moreover, when right-wing and centrist parties formed a coalition government in the past, they still failed to reach a peace agreement. As a case in point, Tzipi Livni, the then-leader of the centrist party Hatnuah who was appointed as Justice Minister and chief negotiator under Netanyahu’s previous government in 2013, was hampered from making any concessions as Netanyahu chose his private attorney Yitzhak Molcho to oversee the negotiations and ensure that she did not make any significant concessions without the expressed approval of Netanyahu.

The Palestinians: Whereas a majority of ordinary Palestinians are weary of the status quo and seek to end the occupation, their leadership (the Palestinian Authority [PA] and Hamas) have thus far failed to agree on common ground to reach a peace agreement with Israel.

Although President Abbas demonstrated a keen interest in reaching a peace accord, disavowed violence, and committed himself to ending the conflict by seeking a political solution, he was unable for several reasons to make any major concessions without linking it to a solution to other conflicting issues.

First, Abbas was negotiating from a position of weakness and in order to strengthen his position, he demanded that Israel make an important gesture first, such as suspending settlement expansion and releasing Palestinian prisoners, which Israel generally rejected.

Second, there was and still exists serious discord between the PA and Hamas, whereby neither can see eye to eye about the negotiating process.

Third, Hamas continues to call for the destruction of Israel and refuses to renounce violence as a tool to achieve its political objective, which is incompatible with the PA’s position.

As a result, the formation of a unity government between the PA and Hamas in April 2014 could not be sustained, as it was impossible for the PA to present a united front in the peace negotiations.

In addition, Netanyahu refused to negotiate with such a ‘unity government’ as long as Hamas continued to reject the three Quartet requirements: recognize Israel, renounce violence, and accept prior agreements between Israel and the Palestinians.

Finally, the Palestinians have been trapped in their rancorous public narrative against Israel even during the peace negotiations further damaging their credibility in the eyes of many Israelis. The PA, not to speak of Hamas, seems to want to win the public relations campaign with their own people more than winning the peace.

This has been coupled with widespread anti-Israeli teaching in schools, regular media attacks, and indoctrination in many public and private institutions.

The PA seems to ignore the fact that their constant anti-Israeli public sentiments play into the hands of the powerful Israeli right-wing constituency while weakening the hands of the center and left-of-center, further deepening the distrust between them.

The latter represent the majority of the Israeli electorate who seek to make peace but remain concerned about the Palestinians’ ultimate intentions.

In addition, the Palestinian officials’ public acrimony against the Israelis further stifled the voices of moderate Palestinians, including in the media. This left the field wide open for extremists, especially Hamas and Islamic Jihad, to promote their resistance to Israel to a receptive Palestinian public.

To be sure, Yasser Arafat, who was a unifying force that exemplified the Palestinian resistance and enjoyed their trust, concluded that Israel is an irreversible reality and switched gears by signing the Oslo Accords.

His successor Abbas, while remaining committed to peace, did not enjoy the same overwhelming support of the Palestinians. The conflict with Hamas and the loss of control over Gaza further weakened him, making it difficult for him to take bold steps to advance the peace process.

Given the internal political conditions among the Israelis and Palestinians, it has become increasingly clear that only international intervention would provide the practical channel that could change the dynamic of the peace negotiations.

Being that France is planning to submit a new framework for peace to the UNSC, the Obama administration can shape the resolution by making it consistent with its position in support of a two-state solution.

Otherwise, any bilateral Israeli-Palestinians negotiation will be an exercise in futility, and the continuing impasse will only lead to a mutually self-destructive path.