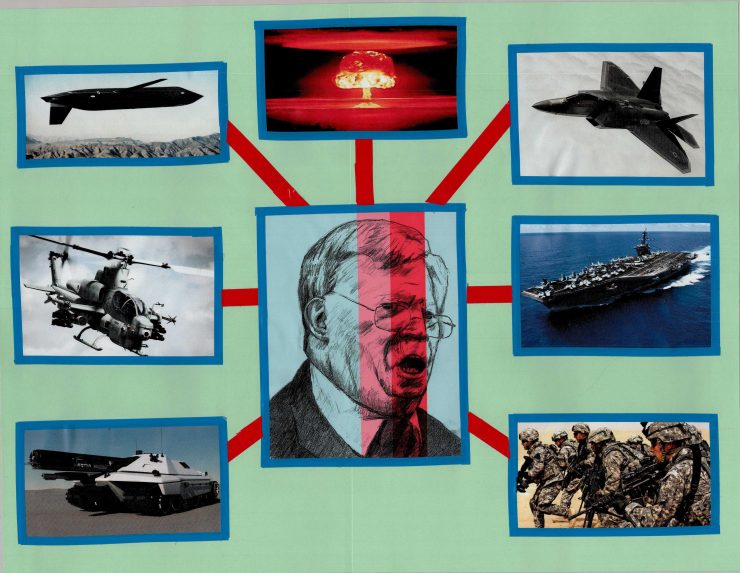 Trump Must Never Listen To The Warmonger Bolton

Waging a war against Iran, or even thinking of doing so, is sheer madness. Trump has thus far wisely rejected the warmonger National Security Advisor John Bolton’s outrageous advice. Waging another war in the Mideast, this time against Iran, would have not only disastrous consequences for the US but will also engulf our allies from which they would suffer incalculable human losses and destruction. Bolton was the architect behind the devastating war in Iraq in 2003, which inflicted more than 5,000 US casualties and a cost exceeding two trillion dollars, allowed Iran to entrench itself in Iraq, and gave way to the rise of ISIS.

The Iraq war would be child’s play compared to a war against Iran, who will put up a fight, far worse than all of the wars in the Middle East since 1948 combined. Much of the Middle East will be in flames. American casualties will be many times that of the Iraq war.

Trump should never listen to Bolton, who is being strongly influenced by Crown Prince bin Salman and Netanyahu, who seem to encourage him to attack Iran. They are dangerous men, and want to prevail over Iran at the expense of the United States by dragging it into an unwinnable war. No matter how much death and destruction Iran will suffer, it will be there to stay. To think that regime change in Iran, as Bolton and Pompeo continue to advocate, will usher in a democracy is an illusion that will never materialize.

The US efforts to establish democracies in Egypt and Libya in the wake of the Arab spring offer glaring examples of the US’ dismal failure. To resolve the conflict with Iran by toppling the clergy though the use of force is not the answer. Iran technically will lose such a war, but that in no way guarantees that regime change and democracy will follow. The answer lies through negotiation and only negotiation, until all conflicting issues that separate the US and its allies from Iran are settled peacefully.

Israel’s and Saudi Arabia’s concerns that if Iran acquired a nuclear weapon would severely compromise their national security is exaggerated at best and unfounded at worse. Even if Iran acquires such weapons, Tehran will not use them preemptively or in retaliation to a conventional attack on its nuclear facilities and high-value military assets. If Iran is actively seeking nuclear weapons, it is doing so strictly for defensive purposes, just like Israel, Pakistan, North Korea, and India.

No one knows better than the Revolutionary Guard and the clergy in Tehran that using nuclear weapons for either defensive or offensive attacks is tantamount to suicide. Israel as a nuclear power will always maintain second-strike capability and will not hesitate for a moment to respond in kind and inflict unacceptable damage from which Iran can suffer for decades.

Like any other country, Iran wants to live and prosper in peace. Yes, it has been and still is involved in many nefarious activities throughout the region. And yes, it has the ambition of becoming the region’s hegemon. But, in the final analysis, Iran will weigh the benefits versus the disadvantages that it can garner by being a constructive player in the Middle East.

However, Iran will fight with all its might against regime change imposed on it by a foreign power or otherwise. The Iranian government, led by the clergy, has every right to govern itself in any manner it chooses. Its current military preparations are only in response to the United States’ threats to use force to effect regime change. Tehran has in no way any offensive designs in mind, and Bolton cannot fool anyone otherwise. I give credit to Trump for being in fact the one who is resisting Bolton’s and Secretary of State Pompeo’s adventurous streak.

Certainly, Iran’s behavior is not acceptable. Iran must stop threatening Israel and other countries in the region, and disabuse Netanyahu in particular of the notion that Tehran is out to destroy Israel. A resolution to the Israeli-Palestinian conflict will also disabuse Iran from using that conflict to justify its enmity toward Israel.

There is no better or more urgent time than now for the EU to interject itself in an effort to ameliorate the growing tension between the United States and Iran. The EU should initiate behind-the-scenes negotiations with Iran and agree with the US on a joint cohesive strategic plan to mitigate the conflict with Iran. The new negotiations should be based on quid pro quo aiming to achieve a comprehensive deal in stages that could lead to a permanent solution.

Every conflicting issue should be placed on the table. Iran must stop meddling in the affairs of other states, freeze its research and development of ballistic missiles, and end its support of extremist groups such as Hezbollah and waging of proxy wars in Yemen and Syria. In return, the EU and the US should offer Iran a path for normalizing relations and removing sanctions, and assure it that the West will not seek regime change.

This kind of cooperation and high level of transparency will serve the objective of reaching regional stability from which Iran can benefit greatly, instead of continuing its nefarious activities which invite even more severe sanctions, and potentially a devastating war.

Neither Tehran nor Washington want war, and every party directly or indirectly affected by the conflict with Iran—especially Israel, Saudi Arabia, and the other Gulf states—will greatly benefit from a new, peaceful agreement with Iran.

Trump must not engage the United States in another war in the Middle East. We have and continue to pay dearly for the Iraq and Afghanistan wars, and we are still fighting the latter. Of all the promises that Trump made in his political campaign for the presidency, preventing another war is the one promise he must keep.