“Why Was I Ever Born”

While tens of thousands of Yemeni men, women and children are dying from starvation and disease, the world is shamelessly watching with deafening silence 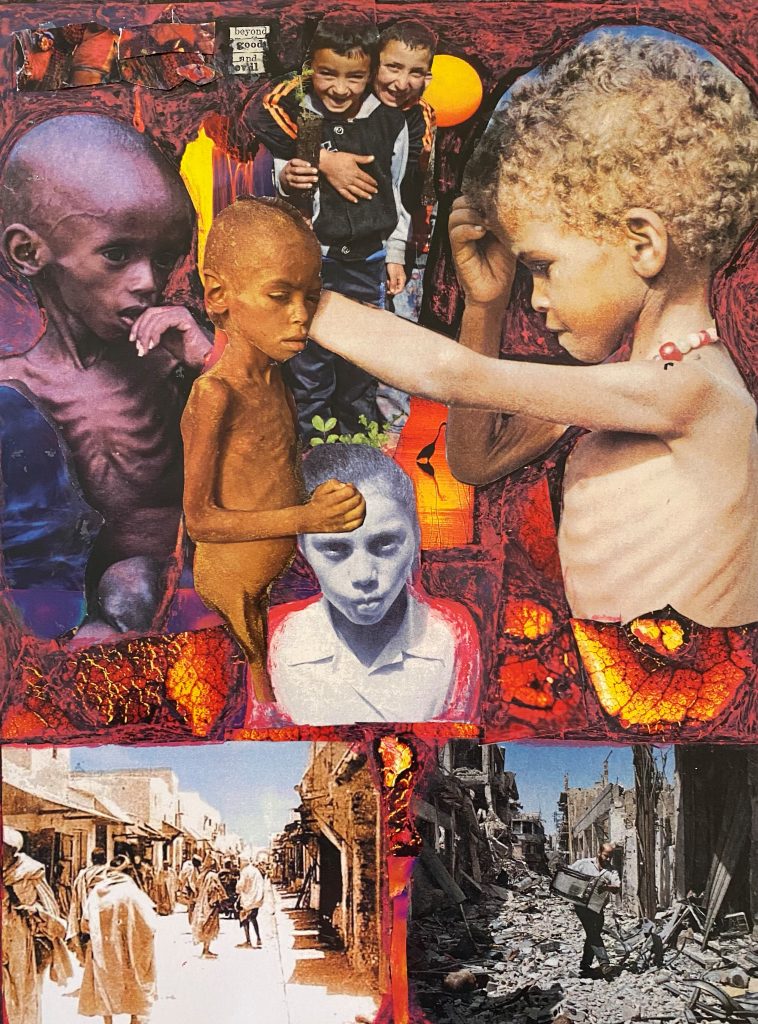 The bombing continues unabated.
The explosions are heard in the distance.
A family with seven children is cowering in fear in a corner of their shack,
Daring not to step out
Dreading instant death from shrapnel or a sniper’s bullet.
Occasionally looking up to the sky through a hole in the roof,
hoping still for some rain drops
collected in a bucket underneath.
Drinking water is nowhere to be found
and only the rain drops keep the family alive.

The mother is careworn;
She tries to breast-feed her baby boy, Mahmood
But her milk runs dry.
The baby’s eyes are open still, gazing at nothing
perhaps wondering what’s happening to him and why.
Slowly he tries to raise his weakened hand
to touch his mother’s breast
as if pleading for just one more drop of milk.
His arm falls back, hanging;
he can’t move, he can’t cry, his eyes run dry
He has no tears left to shed to ease his agonizing pain!

If you bent to ask him how he is feeling
and if he could only talk, he would say,
why, why was I ever born?
Weeks of starvation finally took their turn
his body surrenders
and he dies in his mother’s arms.
How correct was James Baldwin when he said
“A child cannot, thank Heaven,
know how vast and how merciless is the nature of power,
with what unbelievable cruelty people treat each other.”

Countless Yemeni children
are dying from starvation and disease
while the world shamelessly watches in silence
as if this was just a horror story
from a different time and a distant place,
seeing a country ravaged by a senseless, unwinnable war
while a whole generation perishes in front our eyes.
Those at the top who are fighting the war
are destroying the very people they want to govern;
They are the evil that flourishes on apathy
and cannot endure without it.
What’s there left for them to rule?
Twenty million Yemenis are famished
One million children are infected with cholera
Hundreds of thousands of little boys and girls are ravenous
Dying, leaving no trace and no mark behind
to tell the world they were ever here.
And the poorest country on this planet earth
lies yet in ruin and utter despair.

The civilian casualties became a weapon of choice
and the victor will be the one who inflicts the heaviest fatalities
and as the higher the death toll of civilians continues to rise,
climbing ever higher
the closer they believe they come to triumph.
“People speak sometimes about the “bestial” cruelty of man,” Dostoyevsky said,
“but that is terribly unjust and offensive to beasts,
no animal could ever be so cruel as a man,
so artfully, so artistically cruel.”

When will the international community wake up?
Evil humans can do much horrific harm
But those who watch them with deafening silence
cause a greater disaster for failing to act
When will they try to bring the Yemeni calamity to a close?
What will it take to bring the combatants to what’s left of their sanity?
There is nothing left to fight for
Though however hopeless the conditions are
We can still be determined to change course.
And if we succeed in saving even a single life,
as the Abrahamic religions teach us
it is as though we have saved the whole world.

President Biden cannot allow this human catastrophe
to take such a toll on the Yemeni people
and degrade our morals and numb our conscience.
It is time to warn Iran to end its support of the Houthis
as Tehran will never be permitted to establish
a permanent foothold in the Arabian Peninsula.
As an ally, Saudi Arabia should be encouraged to maintain the ceasefire
and sue for a peace agreement.
The Houthis must remember that there will be no victors
Only losers—losers, for they have already lost the country.
The country they are fighting for is no longer there
They must now start at the beginning
And only together with the beleaguered government
put an end to these unspeakable atrocities.
And maybe, just maybe
The community of nations will come together
to right the wrong
Not only for the sake of the Yemeni people
But for the sake of humanity.

We are facing the test of time
and will never be forgiven for failing to rise up
and answer the silent call of that little boy, Mahmood
who died so cruelly so much before his prime.