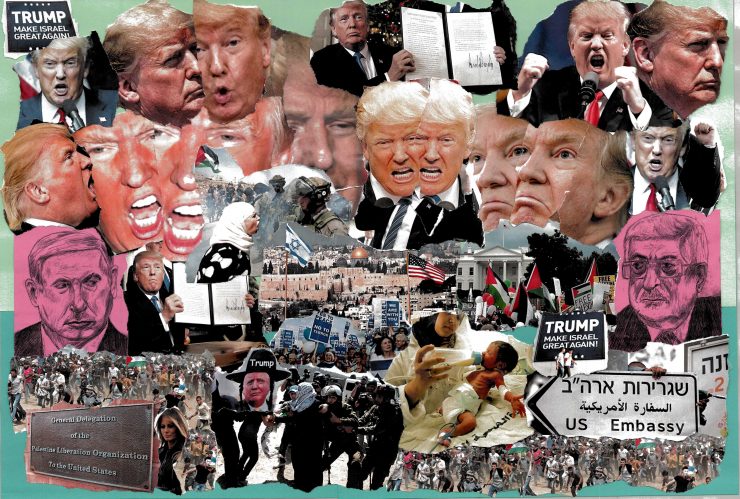 The Deal Or The Debacle Of The Century?

To listen to an audio version of this article, click here.

As we wait for Trump to unveil his peace plan to reach an Israeli-Palestinian peace agreement, he has in fact made the prospect of achieving “the deal of the century” far more remote than it was already. His recognition of Jerusalem as Israel’s capital has enraged the Palestinians, who decided to suspend any further negotiations with his administration. Every subsequent punitive measure Trump has taken against the Palestinian Authority (PA) to coerce them to resume talks made matters only worse. Instead of enhancing, he severely undermined the chances for a peace agreement.

Trump’s recognition of Jerusalem as Israel’s capital, and relocating the American embassy from Tel Aviv to West Jerusalem, could have dramatically advanced the peace process had he also stated that the US will also establish an American embassy to Palestine in East Jerusalem once a peace agreement is reached between the two sides.

In his statement, he left open the question of the final borders that separate East from West Jerusalem to be decided between the two parties. The Palestinians would have welcomed the American move had he also promised to establish an embassy to Palestine, which would have signaled that he was indeed committed to reaching a peace accord based on a two-state solution—but he never was.

Trump’s unilateral action, however, did not simply remove the conflict over Jerusalem off the negotiating table, as he nonchalantly stated. It only suggested that he lacks any appreciation of the Palestinians’ affinity toward Jerusalem. As a result, he made the prospect of finding a mutually accepted solution over Jerusalem extraordinarily difficult. Basically, Trump granted Netanyahu his greatest wish without demanding anything in return to push the peace process forward.

Cutting the financial aid from UNRWA was another major missed opportunity to resolve the Palestinian refugee problem. It is true that UNRWA’s mandate should have been terminated decades ago, as it has directly and indirectly perpetuated the refugee problem. Everyone knows that the Palestinian refugees will never be able to exercise “the right of return,” and everyone who investigated the problem would attest that the vast majority of the refugees themselves do not expect or want to return, even if given the choice.

That said, the refugees have rights, which must be addressed if there is to be a solution to the Israeli-Palestinian conflict. Thus, instead of denying UNRWA future aid, Trump should have stated the obvious, that a solution to the refugee problem rests entirely on resettlement and/or compensation. To that end, Trump could have stated that UNRWA’s functions should come to an end, say within two years, and in the interim, the US along with the EU and the oil-rich Arab states would raise an initial amount of $10 billion dedicated exclusively for refugee resettlement and/or compensation.

It is true that the Palestinians refuse to give in on the principle of the right of return, but this would become easier to address in the context of the resettlement/compensation process, and as hundreds of thousands of refugees resettle in their own country in the West Bank and Gaza. Current refugees in these areas are de-facto internally displaced persons, and their resettlement and/or compensation should begin there.

The third terrible mistake was Trump’s decision to punish the Palestinian Authority by ending the US’ financial aid (except for internal security) to force Abbas to come to the negotiating table. Here too, Trump has demonstrated a complete ignorance of the PA’s mindset and Abbas’ tenuous position at this particular juncture. True, the PA is in desperate need of financial aid, but for the Palestinians, Trump’s punitive action did nothing but strengthen their resolve not to come to the negotiating table crawling.

The Palestinians have pride; they will struggle and even starve before they surrender to Trump’s totally ill-advised action. Even if Abbas were to relent, I doubt it very much that he could survive the ire of the Palestinians in the street, who would rightly feel bullied by Trump, and that their legitimate cause was trashed for money without yet any prospect of reaching a peace agreement with dignity.

Instead, Trump could have improved the chances for peace had he increased the financial aid and encouraged the PA to focus on building the infrastructure of a state. This, in combination with other measures, could have persuaded the Palestinians that Trump is serious, which would have doubtless made the PA far more receptive to his proposed peace plan.

Cutting $25 million in aid to Palestinian hospitals in East Jerusalem may seem an insignificant amount, but it’s a huge sum for the underfunded hospitals which are in dire need of more financial aid. In which way could such an act possibly be seen as anything but mean spirited and indifferent toward the sick and disabled Palestinians receiving essential, if not live-saving, medical treatment?

Ironically, many of the patients seeking medical help in these hospitals are those who are injured as a result of reckless, if not deliberate, injury inflicted by Israeli soldiers or settlers. By what logic then will depriving Palestinian hospitals of badly-needed financial aid advance the peace process, or compel the PA to beg for help?

In contrast to this inhumane act, Trump should have announced his intent to double the financial aid to these hospitals, to help them buy advanced medical equipment and attract more experienced and skilled doctors, which would have conveyed to the PA his concerns and empathy toward their needs.

Finally, ordering the closure of the Palestinian mission in Washington is probably the straw that broke the camel’s back. Under any circumstance, a continuing dialogue with the Palestinians is necessary if for no other reason but to keep the diplomatic channels open for both practical as well as symbolic reasons.

How could the closure of the Palestinian mission help the peace process? This step is in total contrast to one of the main principles of conflict resolution. Leaving the Palestinian mission open would at a minimum suggest that not all doors are shut, especially following all other punitive measures that Trump has thoughtlessly taken.

The eerie thing about all this is that Netanyahu has been cheering Trump as if all the punitive measures are good for Israel. As much as the Palestinians are hurting and may well continue to suffer for many years to come, the longer the Israeli-Palestinian conflict persists, the greater the damage Israel will sustain.

Trump, more than any of his predecessors, has enabled Israel, especially under Netanyahu’s leadership, to further entrench itself in the West Bank, deny the Palestinians their human rights, pass racist laws that openly discriminate against the Palestinians, and methodically chip away at what’s left of a two-state solution.

We are still waiting for the unveiling of Trump’s grandiose peace plans, which by all accounts is tailor-made to suit Netanyahu’s vision that precludes a Palestinian state. As such, Trump’s “deal of the century” will be recalled as the debacle of the century, condemning the Israeli-Palestinian conflict to decades more deepening distrust, intensified hatred, and bloodshed, which may well put an end to any prospect of a two-state solution.