Should the US stop enabling Israel?

I maintain that regardless of the political, strategic, demographic, and regional vicissitudes, the two-state option remains the only viably sustainable solution to the Israeli-Palestinian conflict; the one-state solution is simply a non-starter. I also maintain that successive Israeli governments, irrespective of their political leanings, perpetuated the occupation. They created what is effectively an apartheid state…

Netanyahu Is Destroying Both Israel And The Palestinians

Much of what Israel and the Palestinians are experiencing today has befallen them under Netanyahu’s leadership. He believes that the Palestinians will always pose an existential threat to Israel, which led him to pursue domestic policies that dangerously undermined the country’s founding principles of freedom and equality. Concurrently, he has taken extreme measures to suppress… 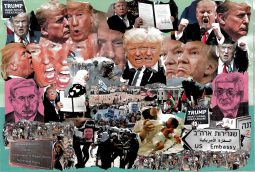 The Deal Or The Debacle Of The Century?

To listen to an audio version of this article, click here. As we wait for Trump to unveil his peace plan to reach an Israeli-Palestinian peace agreement, he has in fact made the prospect of achieving “the deal of the century” far more remote than it was already. His recognition of Jerusalem as Israel’s capital… 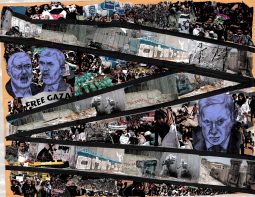 Artwork by Michael Anderson and Sam Ben-Meir Dear Prime Minister Netanyahu: The latest demonstration of Palestinians along the Gaza border with Israel that turned violent was no surprise to me or perhaps to a multitude of Israelis and Palestinians as well. This tragic confrontation that resulted in the death of 120 Palestinians was not the… 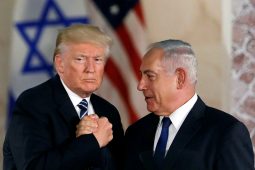 Donald And Bibi: The Blues Brothers

President Trump remained true to his customary flip-flopping on just about every issue when he stated during a joint press conference with Prime Minister Netanyahu that he is “looking at two-state and one-state, and I like the one that both parties like… I can live with either one.” By stating so, Trump gave Netanyahu what…

The Arab Uprising: An Impediment Or An Opportunity For Peace?

There is an ongoing debate in and outside of Israel as to whether or not this is the right time to forge peace with the Palestinians in light of the regional upheavals and instability. The peace process, at this juncture, is hopelessly frozen while the expansion of the Israeli settlements and the continued internal Palestinian…

The negotiations over Iran’s nuclear program during the past few months have produced nothing more than a diplomatic dance in the face of persistent Iranian ploys for time coupled with intransigence on key issues. In failing to reach a negotiated settlement, the conflict with Tehran is inching closer toward a point of no return, where Israel might decide that the circumstances warrant a unilateral attack against Iran’s nuclear facilities. Although there are other scenarios under which Israel may decide to attack Iran, chief among them is Israel’s fear that Iran is close to reaching what Israel’s Defense Minister Ehud Barak terms, “a zone of immunity.” Under such circumstances and given more time, Iran would be in a position to store much of its previous enriched uranium, as well as its high quality centrifuges, deep inside the mountain base of Fordow, thus becoming completely immune from aerial bombardment.

This objective, which Tehran is hard at work in seeking to achieve, limits how much time Israel would have before it acts. This Israeli concern makes the continuing diplomatic efforts coupled with sanctions advocated by the Obama administration unviable options and might in fact be extremely risky to pursue. The Netanyahu government is absolutely convinced that Iran will continue to play for time as it has over the past several years, during which time Tehran has considerably advanced its nuclear program in defiance of the IAEA and in spite of severe sanctions.

Having been engaged in the Arab-Israeli conflict as an advocate for peace, interlocutor, a keen observer and a commentator for much of my adult life, I fantasize once in a while about the regional, if not the global, implications of an Arab-Israeli peace. I allow myself to dream what seems to be an impossible dream because I believe in the dynamism and wealth of the human resources and creativity that both Israelis and Palestinians bountifully enjoy. Peace between Israel and the whole Arab world would usher in a renaissance period to the Middle East that history pages have yet to record.

When Prime Minister Netanyahu announced the expansion of his coalition government to include Kadima, which granted him a historic majority in the Israeli Parliament, I found myself fantasizing again about the prospect of such a comprehensive peace. Truthfully, if a coalition government representing three quarters of the Israeli electorates cannot muster the will and the courage to forge peace, who can, and under what conditions? Israeli and Palestinian leaders, regardless of their political coloration, must sooner than later face, under any circumstances, the inevitability of coexistence. Israel, in particular, who is on the defensive for continuing the occupation and the expansion of settlements, must strive to end its increasing isolation.